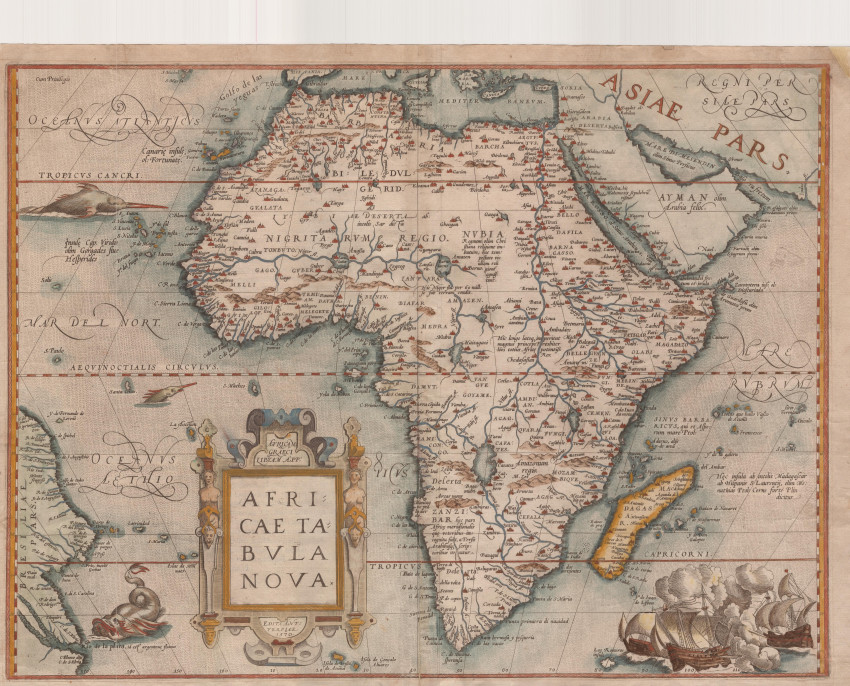 This is a beautiful, rare, 450-year old example of a landmark map of Africa that appeared in the first published Atlas: Theatrum Orbis Terrarum (1570). The map and atlas were the cartographic creation of Abraham Ortelius, whose atlas was the most expensive book published to 1570 - and it was very popular and published for more than seventy years. This example shows well the 'ghost sea monster' off the coast of today's Yemen - the monster faded away in the 1580s.

This map of Africa was printed from one copper plate, engraved by Frans Hogenberg, from 1570 until 1641. The verso text in on page 4, "last line centred like six lines above it; circle-shaped full stop after title: thus 1570 C, Van der Krogt 31:001).

The map is a significant advance on Münster’s map of the continent. Ortelius acknowledged his sources in Catalogus Auctorum: he had been able to draw on information from the Portuguese, other European travellers and from Arabs. However the geography was based largely on Gastaldi’s 1564 wall map. Ortelius’s map has fewer decorative elements but those he does include are stunningly beautiful: three sea monsters (plus the ghost monster off the coast of today's Yemen- it faded away in the mid 1580s; there is a raging sea battle at bottom right.

The Cape of Good Hope is more pointed that in contemporary maps. However the E- W and N-S distance are much more accurate. Orteliusdid not have the Niger as a tributary of the Nile, this differing from Mercator. He also omitted the Mountains of the Moon which were a typical feature of map of the 16th and 16th centuries. He uses Zanzibar in SW Africa to denote a people and Zenzibar as the toponym for the island off the East coast.

The  tip of the top right corner of the page, outside the plateline, has been professionally restored with archival paper. A very good condition example of this attractively coloured, rare example of a 450-year old, landmark map of Africa.

United States of North America with the British Territories