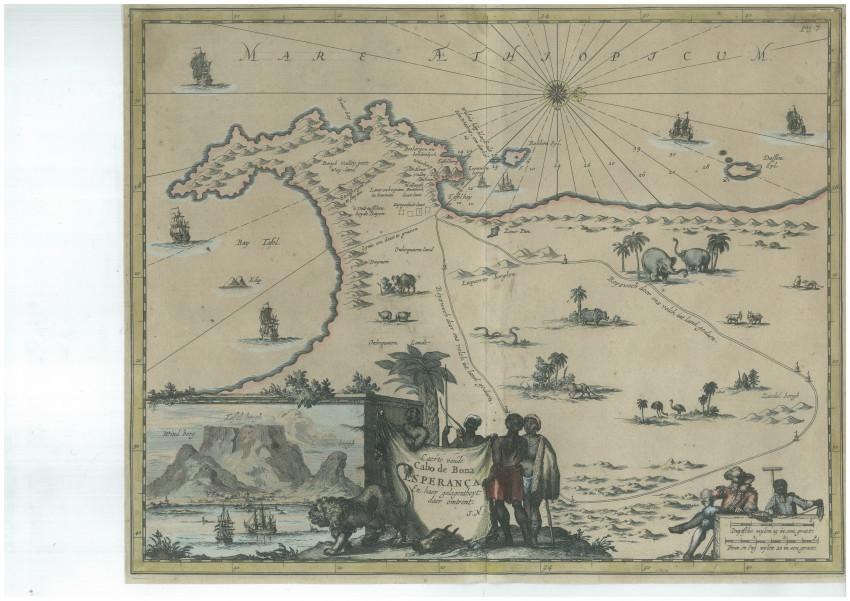 This is a scarce and historically important printed map (1682) that records the settlement along the Liesbeeck river and one of the very early journeys of exploration by the VOC. It is seldom aviable in the market - more commonly available is a later English edition.

Johan Nieuhof had visited the Cape in 1653, 1659 and 1671-1672, when the tiny settlement had not extended beyond the area of the map; he worked for the VOC from 1660 to 1667. Although the map is said to have been engraved from Nieuhoff's drawings, Nieuhof based his drawings on a VOC manuscript map (NL-HaNA, Kaarten Leupe, 4.VEL, inv.nr. 846, probably drawn by Pieter Potter, a surveyor, and taken to the Netherlands in 1658). Nieuhof added toponyms and comments on the agricultural suitability of the land and an artist added crude drawings of animals and trees and a vignette and prospect of the settlement.

In 1657, the VOC allowed some of its employees (Vryburghers - free citizens) to establish farms along the Liesbeeck River below the Wind Berg (Wind Mountain, now Devil's Peak) and the eastern cliffs of Table Mountain. These parcels of land are described as uytgedeelt lant (allocated land, i.e. land grants) on the map.

The map also shows the canal proposed by Commissioner General Rijckloff van Goens that would join Table and False Bays; the canal was never constructed. Hout (Wood) Bay on the northern coast of the peninsula is identified for the first time on a printed map; the bay was one of the few sources of wood used in construction. False Bay is incorrectly named Bay Tafel (Table Bay).

By the time Nieuhof's map was published, settlers had started to occupy land further to the east, e.g. the village of Stellenbosch (1674) - see Loots's 1698 map (map #3).

The map is in very good condition - there are repairs to small tears at the top corners. The paper is aged toned and there is old outline colour and the cartouche is also coloured; there is a beautiful watermark behind False Bay.

References
Norwich's Maps of Africa, #209. Not in Tooley 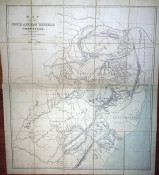