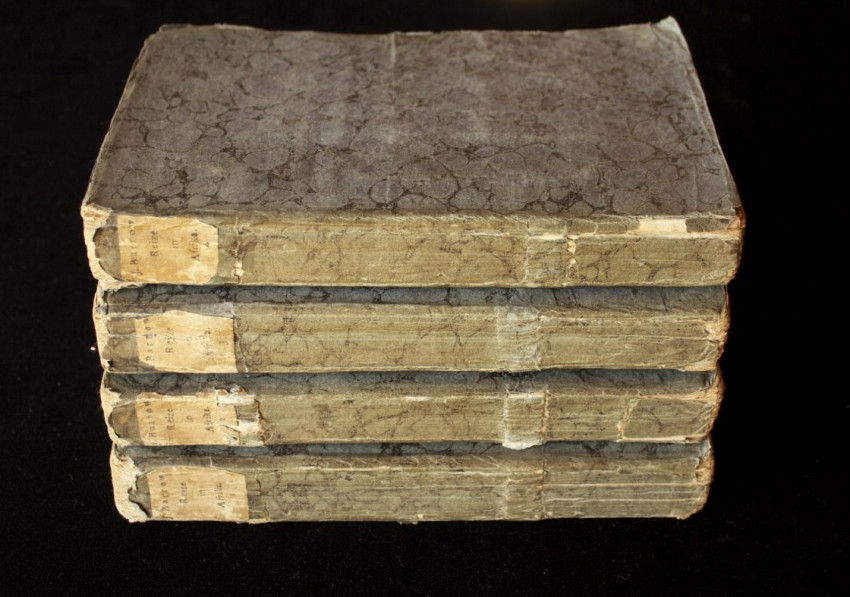 First Dutch Edition of Barrow's Travels into the Interior of Southern Africa in 1797-1798 (A complete set with all maps & plates!)

The first Dutch edition of John Barrow's famous account of his expedition into the interior of South Africa. The four-volume set was published in Haarlem by Francois Bohn between 1803-1805 and is bound in the publisher's original blue-marbled semi- hardcovers.

The work is complete and contains all nine fold-out maps (three hand-coloured) and one fold-out plate (View upon entering Cape Town as seen from Green Point).

Barrow's maps of the South African interior hold the distinction of being the very first of its kind published in book form (or any other format) and were the first compehensive maps of the territory. Barrow's work is also the first in which the distinctive name "South Africa" is given to the sub-continent.

Apart from being one of the most collectible early works on South African exploration, the maps contained within are also highly sought by collectors because of their historical value and visual appeal. In the past copies were hunted almost exclusively for the purpose of extracting the maps and mounting them for display! Here is a complete and unadulterated set that has managed to avoid mutilation for over two centuries.

Vol. II, 250pp. with a fold-out table on page 140, and a magnificent hand-coloured fold-out map at rear.

Barrow was a self-taught, self-made diplomat writer of extraordinary ability. It was not long before he caught the attention of Lord Macartney, the first British ambassador to China. Here he was employed as his secretary and in his spare time mastered the Chinese language and became an expert in their culture and literature. At the time of the First British Occupation, Lord Macartney was appointed governor of the Cape of Good Hope and his secretary, now promoted to Auditor General of the Colony, was given the task of surveying this newly acquired British territory. In the hope of facilitating his task Barrow first visited the colonial offices vacated by the Dutch, but to his great disappointment there was not a single map of the territory to be found. Neither was there a single survey of any of the bays with the exception of Table Bay. Barrow notes that none of the inhabitants knew whether the distance to Graaf-Reynet was 500 or 1,000 miles. It was either called a months journey, or so many hundred hours, with an ox waggon. Such was the abysmal ignorance of the Dutch of their own colony. In no way were the British occupation officials surprised by this, however, because in what can only be described as the spirit of national superiority among competing nations of the time, they simply ascribed this lack of documentation to what they believed to be the Dutchman's natural laziness.  And that's where the investigation ended. What they didn't know at the time, however, and a fact which only came to light 150 years later in 1952, was that extremely detailed surveys were indeed conducted by the Dutch administration between 1785-91 by one Cloete, during the governorship of Col. C. J. de Graaf. The Governor, never completely at ease with the precarious hold they had on the Cape, in great foresight opted to rather send the maps to the Holland colonial office for safekeeping - just in case a different foreign power might one day come to occupy the territory. And so Barrow was left with no other option but to start his historic survey from scratch.

His maps exhibit extraordinary detail and some, like Denis Godfrey (The Enchanted Door), believed that they were suspiciously well-detailed. So detailed in fact that they might even have served the dual purpose of a work of espionage for the British Government under the guise of a natural history work. It can be argued that the reason he provided such detailed depth measurements of Mossel bay, Plettenberg bay, Knysna, Algoa Bay, False bay and Saldanha bay could only have been for the purpose of landing a huge fleet, in case Britain lost their hold on the Cape and needed to retake possession of it. This appears to have indeed been the case as a copy of Barrow's work (current location unknown) once sold on auction over 70 years ago with the unique gift inscription "From Admiral Elphinstone to General Baird" - Elphinstone was in command of a naval squadron which carried out the first British occupation of the Cape in 1795 following the battle of Muizenberg, and Baird was in charge of the land forces at the second occupation of the Cape by Britain in 1806. Godfrey believed that this copy of Barrow's famous work was probably used by General Baird in planning the Battle of Blauwberg, which led to the second and last capitulation of the Cape to the British.

Barrow married a Dutch wife Anna Maria Truter and in 1800 bought a house in Cape Town. When the First British Occupation ended he moved back to England and years later became a founding member of the Royal Geographic Society.

It is always amusing to see how travel writers of the period attempt to devalue the work of their predecessors. Francois Levaillant derided Kolbe for his falsehoods, Lichtenstein critiqued Barrow for what he perceived to be inaccuracies, and Barrow - no different to any of the others in this regard - targeted the famous explorer whom he referred to as "The Valiant Frenchman". In the Dutch edition Barrow remarks that his French translator accused him of being biased towards the work of Levaillant simply because he was a Frenchman. Barrow replied that 'Monsieur Levaillant cannot hold it against me when I point out his mistakes when he himself wrote that "an explorer should not conceal something that might cause errors in science." '

Barrow continues, 'Levaillant's work is filled with noteworthy facts and knowledgable comments, yet they are so mixed with fabrications and fairytales that nobody who carefully examines him can distinguish the one from the other. It is probably of little concern for humanity to know which pleasantries were put on by Levaillant on his favoured monkey or to tell the world that "Kees was still a virgin". It occasionally arises that an explorer presents himself as the hero of a tale. But our valiant Frenchman is the hero on every occasion.

When he describes his courage and determination, the prudence of his measures, and with touching phrases the things he had to endure, it no doubt strokes his pride and that of his readers. But knowing very well how much credence it deserves, the self flattering language he employs fails to make much of an impression on them. However, when he misleads the world on important subjects and creates a false impression of the people and the land which he pretends to know, he exposes himself for rebuke. And it should be made known universally.'

Barrow made some enquiries at one of Levaillant's favourite halfway stops - the house of Slabbert at Teefontein: 'While the family took up an important part in the tale that a certain French author published of his journey in South Africa, the veracity of which is in doubt, curiosity compelled me to make certain investigations with regard to the author. He was well known to the family and they accommodated him on recommendation of the fiscal. Yet the story of his actions in that part of the country and of the heroic deeds he claims to have performed were held by them to be complete fabrications.

I read the one passage in his book to them where he shot a tiger, and where he sharply contrasted his courage with the faintheartedness of the farmers, and they laughed heartily. They said that such an animal had indeed been shot, not by him however, but by a Hottentot. And afterwards, when they tracked the animal to a kreupelbosch where it lay dying, the valiant Frenchman brought an end to the tiger's life with a single shot from his gun.'

Barrow concludes, 'His first voyage to the Eastern part of South Africa is very informative and contains accurate descriptions and numerous correct commentaries and observations. The success of the first part, however, must surely have encouraged him to prepare a second, regardless of how little value the contents of it may be. He appears to have obtained most of it from the work of an English explorer, whom he nevertheless endeavours to rebuke.' 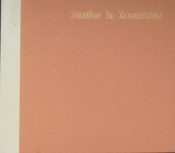