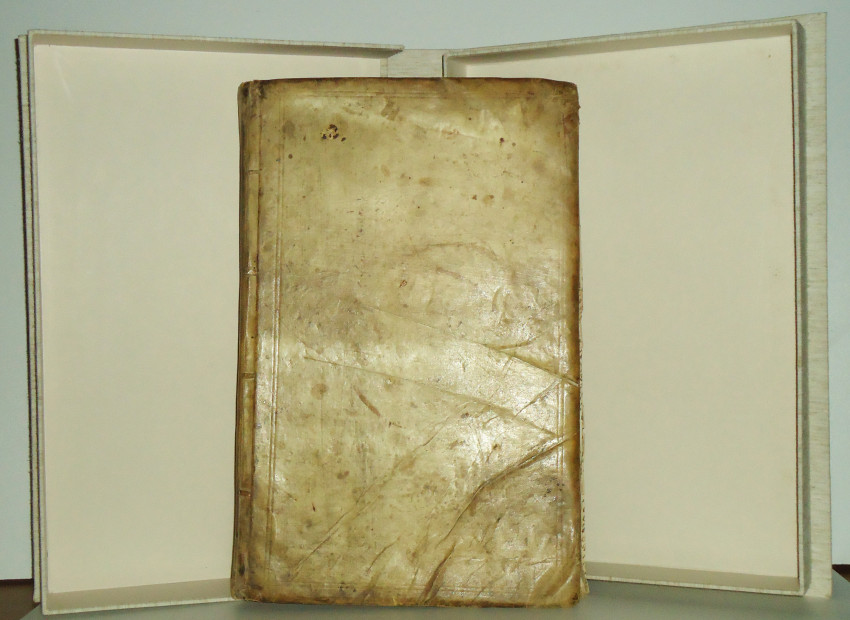 One volume – unpaginated - vellum bound with marbled end papers, which is housed in a specially made oatmeal cloth covered solander box. The log is meticulously handwritten with detailed entries for each day during this period. It commences with an entry The ship Grosvenor at Deptford on November 16st 1761 It covers the first journey of the ship.

Included with the log is a separate 12 page printed document: Orders and instructions given by the Court of directors of the United Company of Merchants of England trading to the East Indies. Specific instructions pertaining to the Grosvenor are hand written in this document, which has 68 clauses, after which clause 69 – 92 are handwritten on 7 further loose pages which have worm holes in them. The individual instruction are dated 10 February 1762 addressed to Captain Watkin Partington of the ship Grosvenor.

The Grosvenor was built at Rotherhithe on the Thames by the shipbuilding firm of Wells. Wells built 108 East Indiamen between 1757 and 1872. The first Grosvenor, having been built in 1761, was registered at 679 tons, but chartered at 499. She was decommissioned in 1772.

The second Grosvenor was built in 1770 and was registered at 729 tons, but also chartered at 499. This is the famous ship that was shipwrecked and the event is well documented. The Grosvenor’s final voyage was her fourth to the East. Although the ship’s log books were lost with the vessel, a good account of the final voyage can be pieced together from survivor accounts, correspondence and receipt books related to the ship. The Wreck of the Grosvenor, an East Indiaman, occurred on 4 August 1782 on the Pondoland coast of South Africa, north of the mouth of the Umzimvubu River https://sahris.sahra.org.za/sites/default/files/additionaldocs/Grosvenor%20Arch%20Summary%20I.pdf

Probably from as early as the 1500s the Wells family had interests in Greenwich and Deptford as well as Rotherhithe but their shipbuilding activities only began at around 1635, in Deptford. Between 1758 and 1797 at least 25 ships were ordered for the Royal Navy and the East India Company and Rankin believes that around 77 East Indiamen were built by them. There is some question over whether a batch of the last of the Wells ships were built at Rotherhithe or Deptford.

The Rotherhithe phase ties in with the last generation of shipbuilding in the Wells family. John and William (born 1761 and 1768) went into the family business, whilst their brother Thomas entered the Royal Navy, where he was sponsored by family connections and eventually became a Rear Admiral. The Wells shipbuilding dynasty had ended by 1814, by which time John and William Wells had sold out of the shipbuilding trade. Although no new ships are recorded being built by the Wells brothers at the Rotherhithe yard after 1797, rates continued to be paid until 1805, which argues that some sort of activity was taking place there. http://russiadock.blogspot.com/2013/11/shipbuilding-at-barnards-wharf-site.html

Extracted from: Hardy (Charles) A Register of Ships, Employed in the Service of the Honorable the United East India Company, from the Year 1760 to 1819, with an Appendix: Containing a Variety of Particulars and Useful Information, Interesting to Those Concerned with East India Commerce https://books.google.co.za/books?id=f9hoAAAAcAAJ

The Salvage Drama of the "City of Lincoln."