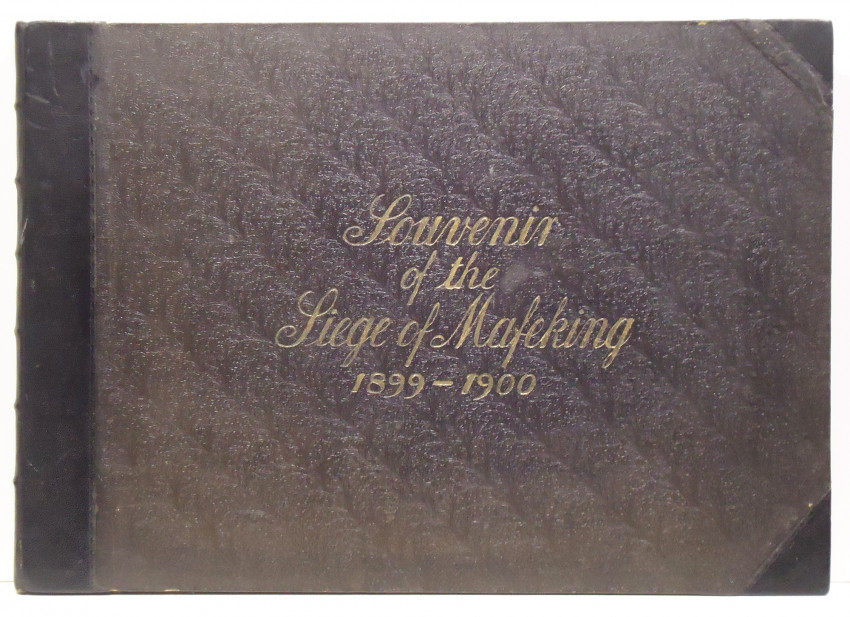 SOUVENIR OF THE SIEGE OF MAFEKING (Signed by Lord Baden Powell and Capt. Fitzclarence)

3, 1,11, 115 illustrations on 62 plates, colophon loosely inserted at the back of the volume, worn at the front hinge at the title page, which has been simply repaired at the bottom of it, half black leather with blind stamped decorative boards on the upper cover with title gilt, a very good copy.

The first illustration Panoramic View of Mafeking from the west is on a double plate and is unnumbered. The rest are numbered 1 – 114.

Signed by Augusta Spencer Churchill. Mafeking 1904 on a front free endpaper opposite the title page

Lady Sarah Wilson, RRC (4 July 1865 - 22 October 1929), born Lady Sarah Isabella Augusta Spencer-Churchill, became one of the first woman war correspondents in 1899, when she was recruited by Alfred Harmsworth to cover the Siege of Mafeking for the Daily Mail during the Second Boer War. She was in the right place at the right time to step into the journalistic breach, having moved to Mafeking with her husband, Lt.-Col. Gordon Chesney Wilson, at the start of the war, where he was aide-de-camp to Col. Robert Baden-Powell, the commanding officer at Mafeking. Baden-Powell asked her to leave Mafeking for her own safety after the Boers threatened to storm the British garrison. This she duly did, and set off on a madcap adventure in the company of her maid, travelling through the South African countryside. Eventually, she was captured by the Boers and returned to the town in exchange for a horse thief being held there. https://en.wikipedia.org/wiki/Sarah_Wilson_(war_correspondent)

On the back of the title page are 2 brief biographical sketches as follows:

THE PROTEACEAE OF SOUTH AFRICA