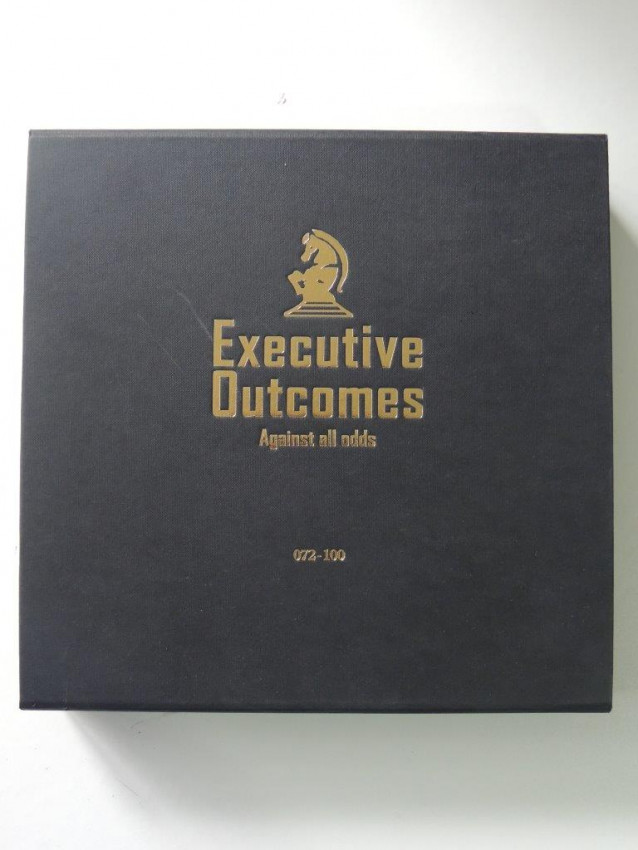 A beautiful limited boxed set. Including a miniature cast AK-47 cast in metal and an Executive Outcomes Challenge Coin. The book, is no. 72 of a limited number of 100 copies. The box and coin are also numbered (72). See pictures.

Executive Outcomes was already well known to several governments and private corporations before it exploded into controversy in 1993 after entering into a contract with Angola’s FAA to train a brigade-level force to decisively end their decades-old conflict with UNITA. It was also well known to those involved in fermenting conflicts in order to topple African governments with a view to controlling resources for personal gain.

The role Executive Outcomes played in bringing an end to the conflicts in Angola and Sierra Leone threatened numerous duplicitous foreign entities. To protect their economic and other interests, a media frenzy was generated to discredit the company, and false media and intelligence reporting became the norm upon which Executive Outcomes was judged.

Despite attempts to bribe the company’s founder and massive pressure from several international governments - including the South African government - Executive Outcomes continued to provide assistance and support to African and other governments under siege. In honouring its contracts, several of its employees made the ultimate sacrifice.

Executive Outcomes is still regarded as the gold standard by which similar companies are judged, and it is the only private military company that never failed in a contract or abandoned a client government. During the years that it was active, the men of Executive Outcomes saved many thousands of lives.

In this revised edition, the author presents a no-holds-barred account of the company’s activities and the numerous threats it had to deal with, including attempts to assassinate its founder and chairman.

Eeben Barlow served as a commandant (lieutenant colonel) in numerous conventional, unconventional, and covert South African Defence Force units. Commissioned in the SADF’s Corps of Engineers, he served as the sapper officer in several infantry battalions, and as second in command of 32 Battalion’s Reconnaissance Wing. Following that deployment, he served as an agent handler for Military Intelligence and thereafter as a covert operative in the SA Special Forces’ shadowy Civil Cooperation Bureau.

When he became ‘politically expendable’ he founded Executive Outcomes, and was primarily contracted to train SADF Special Forces operators in covert operations. As the founder and chairman of Executive Outcomes, he oversaw the initial defeat of UNITA in Angola, the destruction of the RUF in Sierra Leone, and the rescue of western hostages in Indonesia.

He is currently the chairman of STTEP International Ltd, a company that actively supports governments in Africa. He lectures at several military colleges and universities in Africa and abroad, and is also an advisor to several African governments.

The revised edition is very different from the first publication by Galago as a lot more information - such as recently surfaced MI and DFA lies and deception, the duplicity of the South African government at that time and its desire to support a Maoist organisation at the cost of young South African lives, the use of state funds for private gain, and more - has been added.

Bundle of Three Books on Pietermaritzburg

Outdoor Pastimes of An American Hunter

THE SHADOW OF THE WOLF - INSCRIBED FIRST EDITION

THE VISION OF COLUMBUS