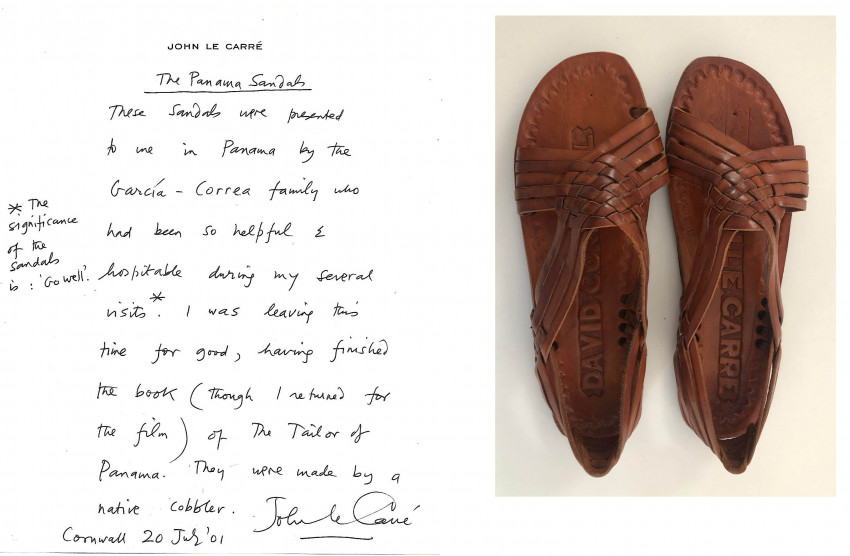 On offer here is a unique and most unusual item from the recently deceased major spy/thriller fiction author John le Carre. This is a a pair of unused men's sandal's presented to le Carre as a gift by his hosts in Panama while he was writing his novel, The Tailor of Panama. The sandals were handmade by a native of Panama who engraved Le Carre's name - both his pen name and his real name - David Cornwell - one on each shoe Insole.

Accompanying the sandals is a 1pp. autograph letter signed and dated by Le Carre, Cornwall 20 July '01, written on a le Carre letterhead. The text of the letter:

"The Panama Sandals - These sandals were presented to me in Panama by the Garcia-Correa family who had been so helpful & hospitable during my several visits.* The significance of the sandals is: go well. I was leaving this time for good, having finished the book (Though I returned for the film of The Tailor of Panama. They were made by a native cobbler. John le Carre, Cornwall, 20 July '01".

Both the sandals and the letter are in fine condition. A unique item for the serious Le Carre collector.

The Tailor of Panama was published in 1996 to glowing reviews. Le Carrea apparently made 5 trips to Panama to research the novel. A movie starring Pierce Brosnan and Geoffrey Rush, based on the book, was released in 2001, also to good reviews.

WITH THE NAVAL BRIGADE IN NATAL