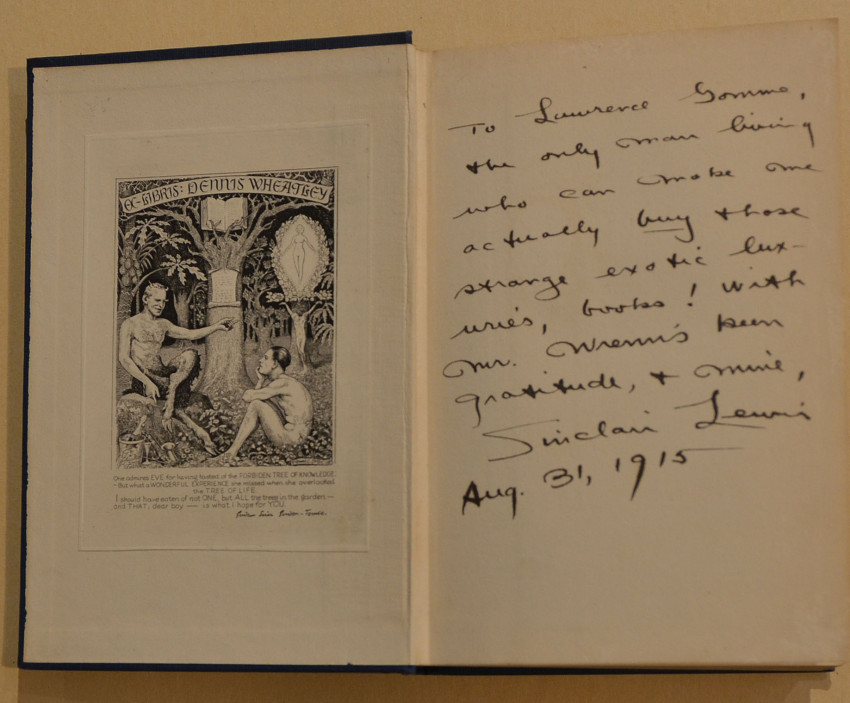 THE TRAIL OF THE HAWK - INSCRIBED FIRST EDITION

The fairly scarce first edition of this early and rather unsuccessful novel by Sinclair Lewis, the first US writer to win the Nobel Prize. This was his third book and the second under his own name. From the library of Dennis Wheatley, with his ex libris (by Frank C. Pape) on the front pastedown. With a wonderful full page inscription on the front free endpaper: "To Laurence Comme, the only man living who can make one actually buy those strange exotic luxuries, books! With Mr. Wrenn's keen gratitude, & mine, Sinclair Lewis. Aug 31, 1915". The reference is to Our Mr. Wrenn, the author's first novel. With a colour frontispiece by Norman Rockwell - a very early illustration in Rockwell's career, done when he was just 21 years old.

In the original blue cloth with gilt lettering on the front board. The lettering on the spine is rather dulled, otherwise this is a very good plus clean tight copy. Lacking the very scarce dustwrapper.

Laurence Gomme was a publisher and bookseller in New York and a friend of Lewis since they first met as undergraduates at Yale. He was the first president, in 1949, of the Antique Booksellers Association of America. He had for many years made his "Little Bookshop Around the Corner" in Manhattan a meeting place for the literati of the day, including the novelist and essayist Christopher Morley and the poet Joyce Kilmer. He had been on the executive committee of the International League of Antique Booksellers.

University of the Cape of Good Hope.