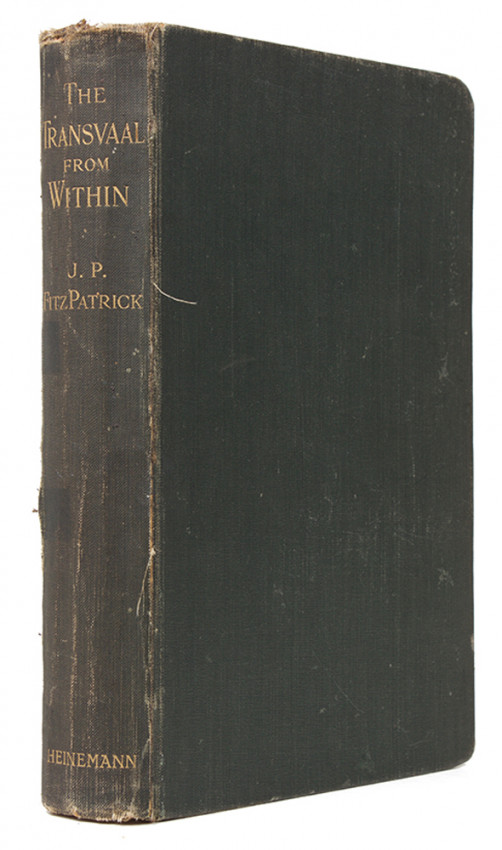 THE TRANSVAAL FROM WITHIN (Presentation copy signed by the author)

A private record of public affairs.

First edition: 440 pages + 32 pages publisher’s catalogue, uncut edges with foxing, book plate on the front paste down end paper, original blue cloth binding titled gilt on the spine, which is starting to fray at the top and the bottom, the cloth is rubbed along the edges, corners slightly bumped, a good copy.

Inscription on a front free end paper reads: To Jas. B. Taylor – My dear Jim, This from me to you and your better half with my love Yours J Percy Fitzpatrick 5 Oct 1899. James Benjamin Taylor’s book plate is on the front paste down end paper.

Mendelssohn (Sidney) South African Bibliography volume 1, page 549 -550: The author was a well-known man in Johannesburg, and had been deeply implicated in the Reform Movement, and was subsequently sentenced to imprisonment, accompanied by fine and banishment; the sentence, however, was commuted on the prisoner agreeing not to mix in the politics of the Republic for three years. Mr. Fitzpatrick employed some of this period of compulsory political silence in writing this volume, which is a comprehensive account of the politics of the Transvaal.’

‘Ample evidence is produced with regard to the bad faith shown by President Kruger as to the terms under which the Reformers laid down their arms; and the publication of the negotiations between Coster, the State Attorney, and Wessels (who undertook the case of the prisoners), in order to procure the plea of guilty on their part, hardly serve to show the former in the light of an honest or truthful advocate. The work is so. full of important matter that it is impossible to give a resume which would not assume too great proportions, but it appears to have met with the approbation of all classes and sections outside the ranks of the extremists, and for all practical purposes it has encountered no detailed and effective answer.’

James Benjamin Taylor (December 1860 – 25 December 1944) was a South African Randlord. Jim Taylor followed the normal route to great wealth – diamonds in Kimberley, gold in Barberton and Pilgrim's Rest and ending up on the Witwatersrand in Johannesburg. His ability to speak Afrikaans was instrumental in his rise to wealth and power, and he became a confidant of President Paul Kruger of the Zuid-Afrikaansche Republiek. He acted as intermediary between the Government and the mining industry, and was privy to many of the political machinations leading to the Jameson Raid and the Anglo-Boer War. https://en.wikipedia.org/wiki/Jim_B._Taylor

From the verso of the title page: Written in August 1896
Privately circulated in June 1899 Supplemented and published September 1899

The first public edition appeared in September 1899 and eight more impressions were required before the end of that year, the total number of copies sold being over 100,000.

THE HISTORY OF THE NORMAN CONQUEST OF ENGLAND 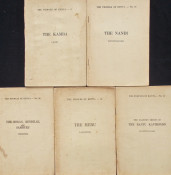 THE PEOPLES OF KENYA