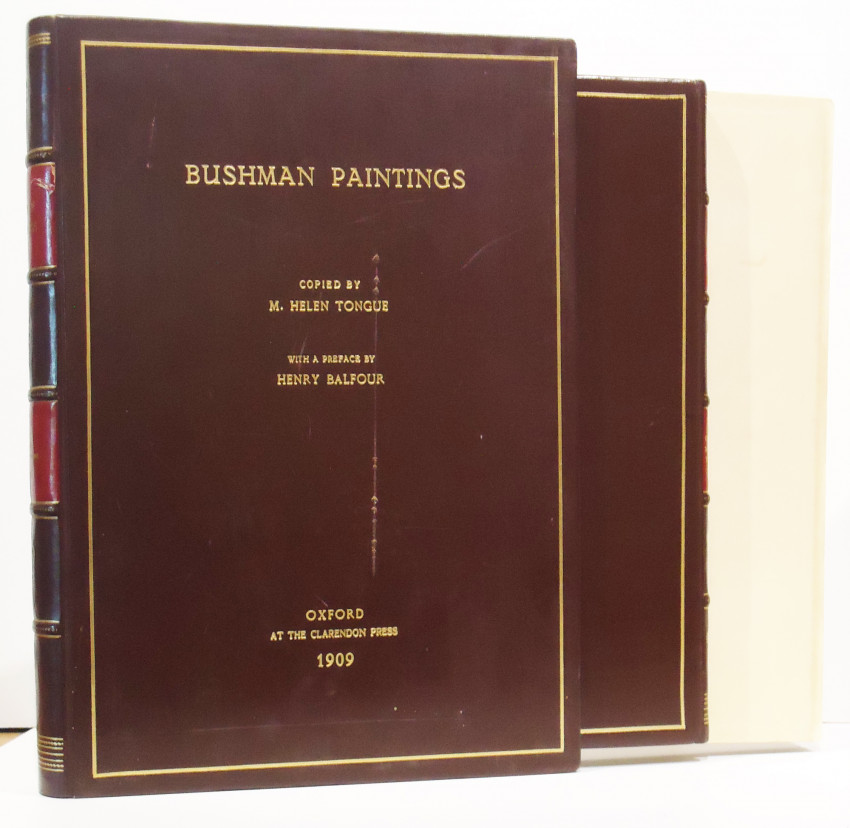 with a preface by Henry Balfour

48 page booklet bound in full leather containing 2 chromocollotypes - 1 double page and 4 plates, preface, introduction, notes on the Bushmen and list of plates with 1 loose sheet with 2 maps, 54 loose colour plates of Bushman paintings, housed in a specially made full brown leather slipcase to match the booklet, titled gilt on the upper cover with red title labels gilt on the spine. Although the slipcase has a mark in the leather on the front cover, it is a very good copy.

M. Helen Tongue was a school teacher at Rockland Girls’ High during the 1890s and 1900s in the town of Cradock in the Eastern Cape, South Africa.

It was here that she met Dorothea Bleek, daughter of famous San linguist and ethnographer, Wilhelm Bleek. The two travelled widely visiting rock art sites in the region. Tongue developed a direct contact tracing technique to record each image (both painted and engraved) in its exact proportions and in its relationship to other images as they appeared on the rock surface. In this way, she took an important step beyond the pioneer recording work of George Stow.

Tongue’s Eastern Cape copies are her earliest. Her first copy was made on a farm in Molteno District. In this early work, she worked alone. But, the bulk of her copies were made during three longer fieldtrips beyond the Eastern Cape border, together with Dorothea Bleek.

At the beginning of 1906, Tongue and Bleek made a train trip from Cradock to Bloemfontein and Ladybrand (Free State), where they recorded various rock art sites. Most of the sites visited were located by using the descriptions of George Stow.

A second expedition in the summer of 1906/07 took them through the Eastern Cape and into Lesotho. Their third and final expedition was by train to Fauresmith (Free State) and wagon to Luckhoff in the Karoo (Western Cape).

In 1908 a selection of Tongue copies were exhibited at the South African Public Library in Cape Town and then at the Royal Anthropological institute in London. In 1909 a series of copies were brought together in a handsome portfolio of 54 plates and an accompanying book with two collotype plates and eight black-and-white photographs.

Helen Tongue wrote descriptions for each site and each plate, Dorothea Bleek contributed “Notes on the Bushmen” and Henry Balfour wrote a preface. The book was titled Bushman Paintings, it was Tongue’s first and only rock art publication.