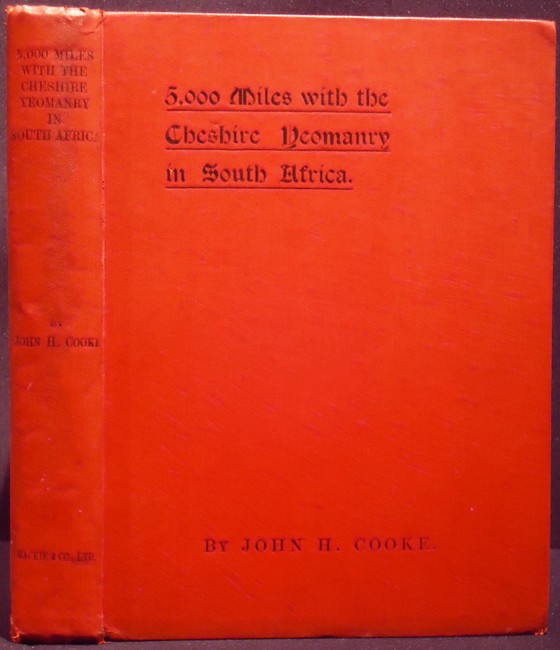 5,000 MILES WITH THE CHESHIRE YEOMANRY IN SOUTH AFRICA

A Series of Articles Compiled from Letters and Diaries Written By Officers, Non-Commissioned Officers and Men of the 21st and 22nd (Cheshire) Companies of Imperial Yeomanry, relating their experiences during the South African War in the years 1900-1901: also Articles from "The Times," "The Times History of the War," and other papers relating to the marches, movements and operations of the two Companies.

Illustrated by One Hundred and Sixty Plates, Photographs and Portraits.

434 pages, list of subscribers, 2 frontispieces, full page and other illustrations throughout, folding map in a pocket in the back cover, original red cloth with black titling on the upper cover and spine (small worn holes in the upper joint but these have no penetrated the text block), light water stains on the spine and rear board, the contents which are printed on coated paper are bright.

Hackett (R.G.) South African War Books, (London 1994), page 75, ‘A comprehensive record compiled from diverse sources. The 21st and 22nd (Cheshire) companies of Imperial Yeomanry operated in the Orange River Colony and Cape Colony, the record included nominal rolls of both companies together with an itinerary. Five hundred copies of the book were printed, many of them numbered and signed by the compiler.’

Colophon on the title page reads:

Signature of the Compiler….John H. Cooke.

NEW ZEALANDERS AND THE BOER WAR

A Fight to a Finish