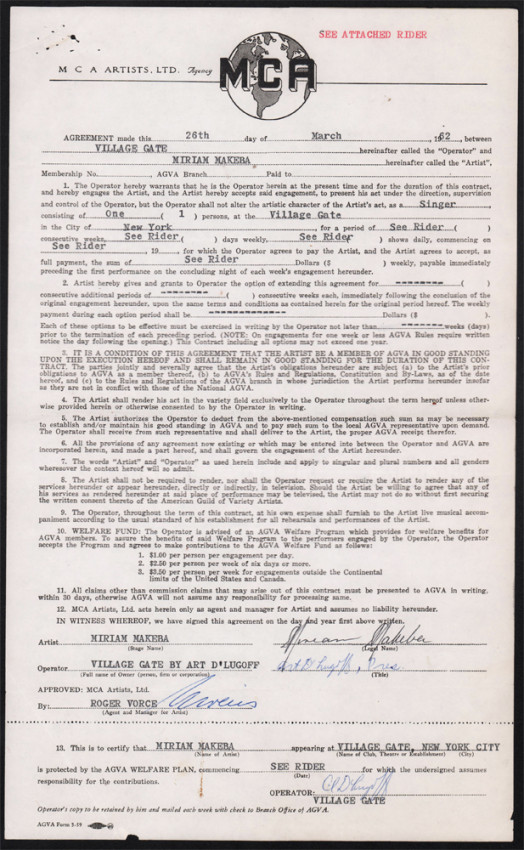 Original one page contract signed on 26th March 1962 between Art d’Lugoff of the Village Gate and Miriam Makeba.

Reference is made to the rider which is supposed to be attached to the contract. This rider is missing.

The Village Gate was a nightclub at the corner of Thompson and Bleecker Streets in Greenwich Village, New York. Art D'Lugoff opened the club in 1958, on the ground floor and basement of 160 Bleecker Street. The large 1896 Chicago School structure by architect Ernest Flagg[1] was known at the time as Mills House No. 1 and served as a flophouse for transient men. In its heyday, the Village Gate also included an upper-story performance space, known as the Top of the Gate.[2] Throughout its 38 years, the Village Gate featured such musicians as John Coltrane, Coleman Hawkins, Duke Ellington, Jimi Hendrix, Dizzy Gillespie, Bill Evans, Dave Brubeck, Charles Mingus, Sonny Rollins, Dexter Gordon, Art Blakey, Woody Shaw, Miles Davis, Stan Getz, Vasant Rai, Nina Simone, Herbie Mann, Woody Allen, Patti Smith, Velvet Underground, Edgard Varèse, and Aretha Franklin, who made her first New York appearance there. The show Jacques Brel is Alive and Well and Living in Paris, debuted at the Village Gate in 1968. https://en.wikipedia.org/wiki/Village_Gate