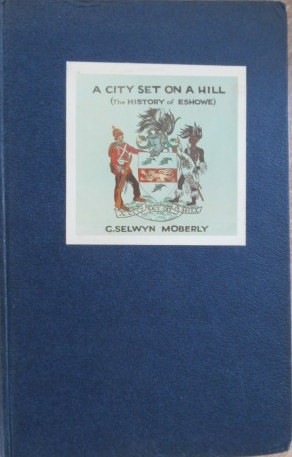 A City Set on a Hill

The History of Eshowe (Signed and Inscribed copy) Numbered 316.

Hardback with bumped blue boards with title label to upper board and gilt lettering to spine.

I feel highly honoured in having been asked to write this foreword. Like the author who grew up in Eshowe, I have also been closely associated with the town since 1902. Most of those portrayed in these pages were known to me either as colleagues, friends or acquaintances, so that I can vouch for much of what is contained in this book.

Eshowe, the place of cold winds, was the capital and administrative head of Zululand from the time of the arrival of the first British Resident in 1881 to the consummation of Union in 1910. The country around it was the favoured area for Zulu clans from the time of their first arrival there some four or five hundred years ago, and the homeland of Shaka, his brothers Dingane and Mpande, and many other great chieftains before him. Cetshwayo spent much of his boyhood at Eshowe, and died there as a fugitive in 1884. It is a part of Zululand that has witnessed many a gory scene from the days of Dingiswayo and Shaka onwards. Rev. Ommund Oftebro and other early missionaries laboured during the reign of Mpande.

From this historical background the author has written an interesting and most absorbing story especially for Zululand's "old timers", and the Eshowe Rotary Club is to be congratulated for having initiated its production-a valuable work by an able pen.