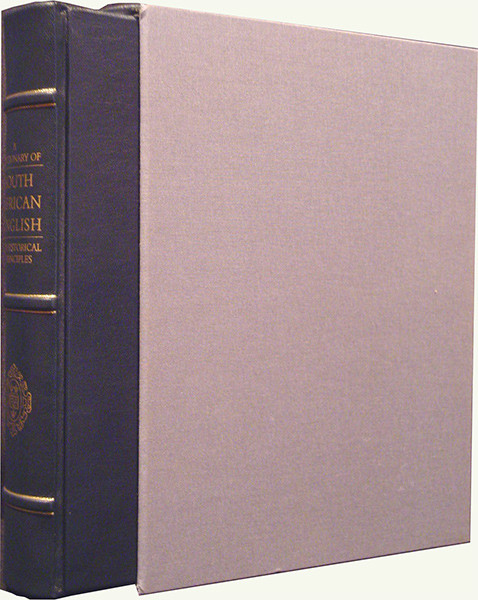 South African words and their origins

Signed on the title page by Nelson Mandela

A Dictionary of South African English on Historical Principles is the fullest ever study of the English language in South Africa. The result of 25 years of work, this dictionary has been researched and written according to historical principles. However, as well as recording examples of South African English going back to the sixteenth century, the dictionary also provides an insight into the dramatic political and cultural changes in South Africa's history by examining the country's ever changing language right up to the present day.

Research into language has involved the contributions of hundreds of individual South Africans, as well as extensive research into all other forms of the written and spoken language. Diverse and informative entries include robot (a traffic light), bakkie (a small truck), bond (a mortgage), and brinjals (aubergines). The dictionary includes such areas as children's slang, the vocabulary of soldiers, the mines, local music terms, the townships, food, and a detailed look at the complex language of apartheid. English words originating from all the country's groups are recorded, including words from Dutch/Afrikaans, the Malayo-Indonesian languages, the Indian, Khoisan, Nguni, and Sotho languages.
https://www.researchgate.net/publication/269555882_A_Dictionary_of_South_African_English_on_Historical_Principles

Published by Oxford University Press in association with The Dictionary Unit for South African English, 1996