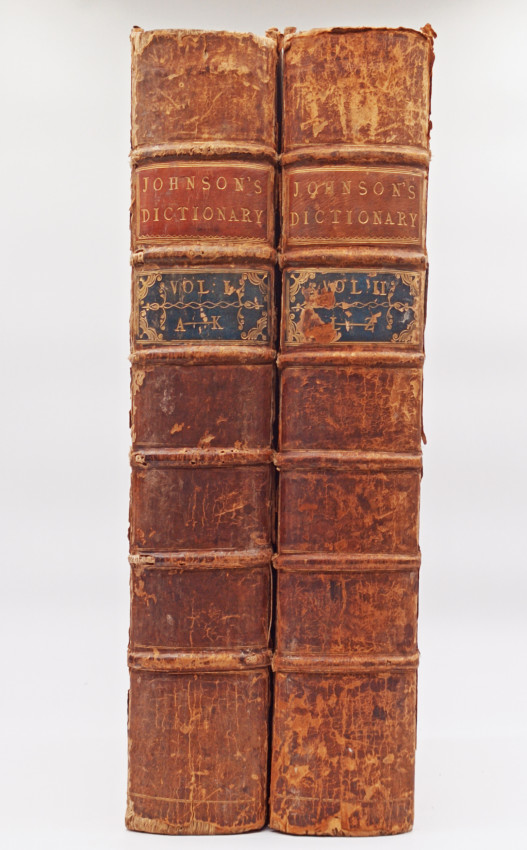 A DICTIONARY OF THE ENGLISH LANGUAGE:

In Which the Words are deduced from their Originals,

And Illustrated in their Different Significations by Examples from the best Writers.

To Which Are Prefixed, a History of the Language, and an English Grammar.

Second Edition: Two volumes – unpaginated, red and green leather title labels gilt on the spines, bound in full contemporary calf which is worn along the edges and at the corners, the hinges are splitting along the spines, the contents are bright and free of foxing, a good set.

A Dictionary of the English Language, the famous dictionary of Samuel Johnson, published in London in 1755; its principles dominated English lexicography for more than a century. This two-volume work surpassed earlier dictionaries not in bulk but in precision of definition.

Its strength lay in two features: the original, carefully divided and ordered, elegantly formulated definitions of the main word stock of the language; and the copious citation of quotations from the entire range of English literature, which served in support and illustration and which exemplified the different shades of meaning of a particular word.

A Dictionary of the English Language included a history of the language, a grammar, and an extensive list of words representing basic general vocabulary, based on the best conversation of contemporary London and the normal usage of respected writers. The original was followed in 1756 by an abbreviated one-volume version that was widely used far into the 20th century.
https://www.britannica.com/topic/A-Dictionary-of-the-English-Language-by-Johnson