These two volumes were gifted to Brian & Jill Marsh , May 1985, by Bill Feldstein (hunter).

One thousand copies were published by The Amwell Press for The National Sporting Fraternity Limited as the 15th & 16th books in its African Hunt Heritage Collection. These are copies number 103, signed by Margaret Kummerfeldt and Jim Rikhoff, President of NSFL. 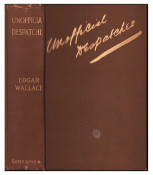