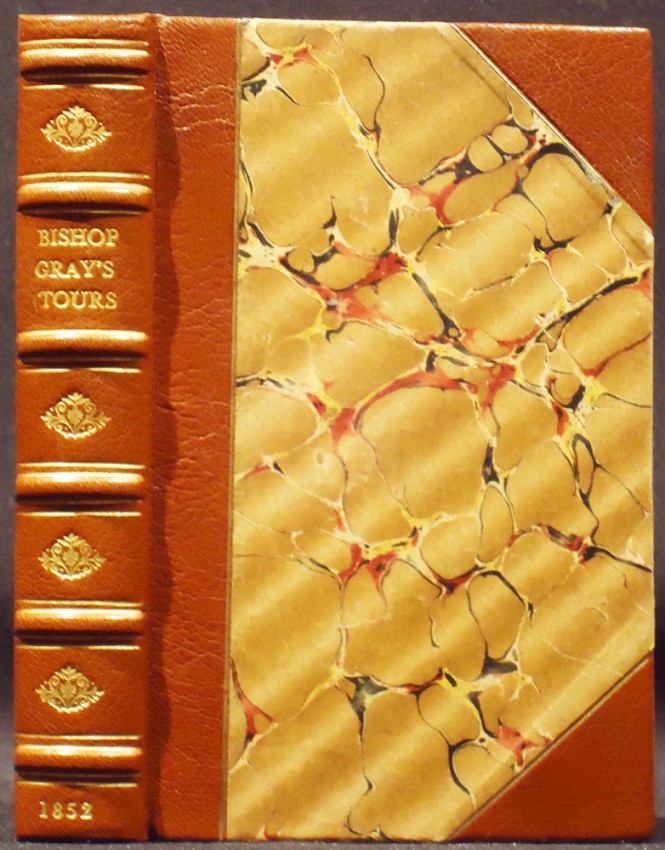 A JOURNAL OF THE BISHOP'S VISITATION THROUGH THE CAPE COLONY, IN 1848,

Published: The Society for the Propagation of the Gospel, London, 1852

WITH AN ACCOUNT OF THE VISIT TO THE ISLAND OF ST. HELENA, IN 1849, with A JOURNAL OF THE BISHOP'S VISITATION TOUR, THROUGH THE CAPE COLONY, IN 1850

Second edition: 87 + 227 pages, 2 folding maps - the first map has been lined with Japanese paper and repaired at the first fold, recent half brown morocco with marbled paper sides, a good copy.

Mendelssohn (Sidney) South African Bibliography, volume 1, page 627-8: 'The diocese over which Bishop Gray ruled was at this period the largest in the world with the exception of Calcutta, and contained not less than 250,000 square miles. His first visitation was commenced on August 24, 1848, and extended through the Cape Colony, including Kaffraria and the Albany Districts. All through the tour the ministers of the Dutch Reformed Church received the Bishop kindly and hospitably, and on nearly every occasion placed their pulpits at his disposal whenever required.

The journal contains an excellent description of the state of the Colony in the middle of the nineteenth century, the author visiting a very large number of towns, villages, and missionary and other settlements. He was present at the celebrated meeting of Sir Harry Smith with the Kaffir chiefs at King William's Town on October 7, 1848 and gives an account of the proceedings at which Sandilli, Makoma, and Umhalla were present, Kreli not arriving until the next day. The tour was extended to Kaffraria, then suffering the ravages of the Kafir War, and was completed on December 21st. The tour recorded in part II, was commenced on April, I, 1850, and consists of a journey through the Karoo to Colesburg, crossing the Orange River into the Sovereignty, and from thence to Natal, Faku's country, British Kaffraria, and the Eastern Province.'