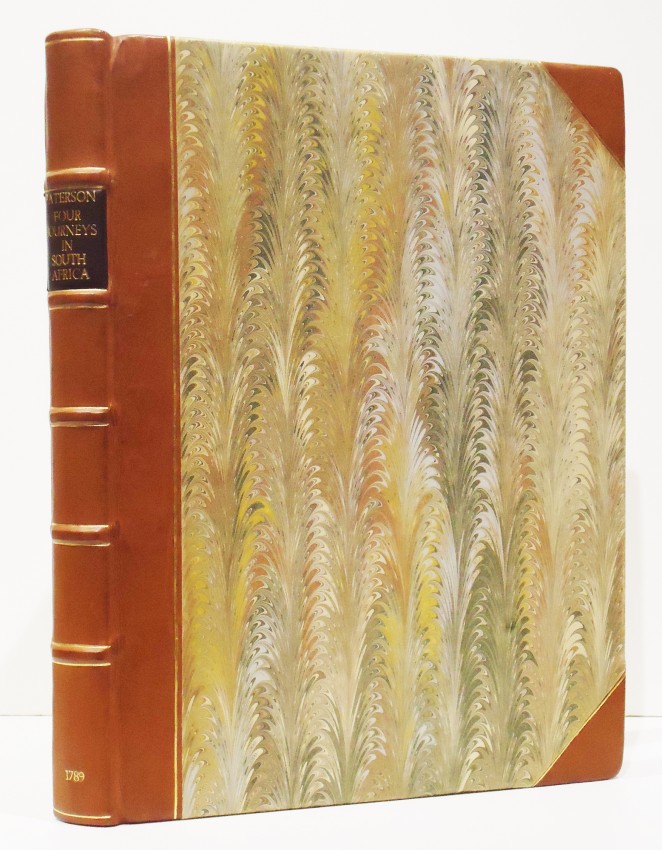 In the years One thousand seven hundred and seventy-seven, eight and nine. Illustrated with a map and seventeen copper-plates.

First edition: vi, [ix]-xii, 171 pages followed by iii index, (i) errata and directions of placing of the plates, 17 hand coloured engraved plates - 2 bound out of sequence - (14 of botanical subjects, 1 of a Camelopardalis (Giraffe) and two of Bushmen habitations and Hottentots), folding map at the end, half brown calf with black title label gilt on the spine, marbled paper boards. There is light foxing mainly on the page edges which are all uncut giving wide margins, a very good copy.

This copy is unusual with the hand coloured plates.

William Paterson (1755-1810), traveller and lieutenant-governor of New South Wales, was born on 17 Aug. 1755. He entered the army at an early age, but not before he had developed a strong liking for natural history, especially botany. The interest and patronage of Lady Strathmore enabled him to gratify these tastes, and before entering upon active service he had made a series of exploring expeditions in the Hottentot country. He left England early in 1777, arrived at Capetown in May, and on 16 Oct., in company with Captain Gordon, made his first expedition, returning to Cape Town on 13 Jan. 1778.

His second expedition lasted from May to 20 Nov. 1778. His third was into the district which he called Caffraria, and claimed as hitherto unknown, and it lasted from 23 Dec. 1778 to 23 March 1779. His fourth journey occupied him from 18 June to 21 Dec. the same year. He made several fresh contributions to science, and is credited with having brought to England the first giraffe-skin ever seen there. The French traveller Le Vaillant several times refers to his researches in high terms. Paterson published 'A Narrative of Four Journeys into the Country of the Hottentots and Caffraria in the years 1777-8-9,' London, 1789. A second edition and a French translation appeared in 1790. His botanical collections are in the Natural History Museum at South Kensington. http://en.wikisource.org/wiki/Paterson,_William_(1755-1810)_(DNB00)

Mendelssohn (Sidney) South African Bibliography, Volume 2, pages 143-4, 'Mr Paterson accompanied Colonel Gordon (Commander of the Troops of the Dutch East India Company in South Africa) and Jacob van Reenan in several trips to the interior. He remarked that he does not give a description of the Cape as he would be only repeating what Sparrman and Masson had already communicated in their publications. In the course of his travels the author penetrated as far as Namaqualand on the west, and the Great Fish River on the south-east. Although the principal feature of the work is the description of the botanical specimens collected and noted by Mr. Paterson, there are many interesting notes respecting the natives, with a few remarks on the Dutch Colonists.'