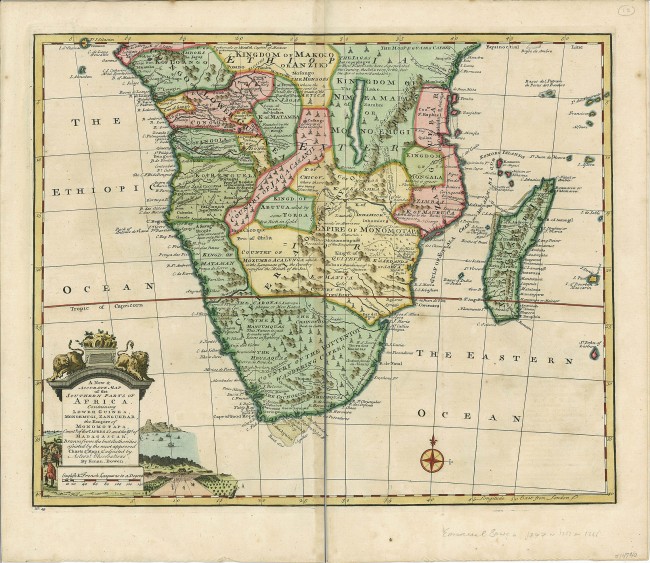 A new & accurate map of the southern parts of Africa

Containing Lower Guinea, Monoemugi, Zanguebar, and Empire of Monomotapa, county of the Cafres &c. and the Isld. of Madagascar. Drawn from the best authorities, assisted by the most approved charts & maps & adjusted by astronl. observations. By Eman. Bowen.

This full-coloured map, with 49 at the bottom left, is the first state of the map, later states  (i.e. maps printed after changes had been engraved on the plate), have 44, 56 or no number at bottom left. The map is in fine condition; the halves were printed on separate pages and have been joined.

Emmanuel Bowen (c. 1693 – 1767) was a leading and prolific 18th century English cartographer who could engrave; he also sold maps & prints from his shop in London. Famous cartographers, such as Thomas Jeffrey’s worked for him. After Bowen’s death, his son, Thomas, carried on the business.

This map came from Bowen’s massive Complete Geography with seventy maps, ‘being all new-drawn and engraved according to the latest discoveries and surveys … for the use of gentlemen, merchants, mariners, and others, who delight in history and geography’.

Bowen Snr’s maps usually followed the knowledge of the time.  This map of southern Africa seems to be based on the geography of the famous French cartographer, Guillaume Delisle, who, in 1700, broke from the outdated traditional cartography based on Ptolemy and thereby advanced scientific cartography. Kingdoms and Empires of Africa, as they were known or thought to exist at the time, are colourfully illustrated.

Delisle used the Paris prime meridian but Bowen used London on this map (see bottom right of longitude scale), the Greenwich Royal Observatory having been established in 1721.

The map includes all of Madagascar, but, while Bowen aspired to accuracy, the map also includes the mythical island of St. John of Lisbon (AKA Juan de Lisboa), to the south-east of Madagascar. This phantom island appeared commonly on maps of the 17th and 18th century. Bowen misspells a number of place names; in today’s South Africa, these include ‘Nossel Bay’ for Mossel Bay; (‘Hermosa By’ for Formosa (Plettenberg) Bay), and (‘Hellenbok’ for Stellenbosch.

Bowen’s maps are also well known for their long titles, for being attractive and for his inclusion of interesting annotations. This map does not disappoint: 'Hancumquas: This nation is said to make use of Lions in fighting' or 'Cabonas: Antropophages or Men Eaters' or 'The Jagas: Antropophages or Men Eaters who have depopulated this Country, the Soil is very fertile, but the Air is esteem'd unhealthy' (in the 18th century, the miasma theory of disease held that bad air caused diseases such as malaria).

An attractive vignette at the bottom left includes an impressive cartouche. About the cartouche is a vignette with an inaccurate prospect of Cape Town and an illustration of  Vergelegen, which had been Willem Adriaan van der Stel ’s country residence. The latter drawing was copied from the Kort Deductie (ca. 1708) in which Van der Stel published on his return to the Netherlands in an attempt to refute the burghers’ claims against him that had resulted in his recall.

This is an attractive map from the leading 18th century English cartographer; in addition, it has numerous conversation-generating annotations and it depicts a short-lived phantom island in the Eastern (i.e. Indian) Ocean.