A Pilgrimage to Nejd, or the Cradle of the Arab Race (Two Vols)

1881 edition, second. Two Vol set of Lady Anne Blunt's visit to the Court of the Arab Emir, and Our Persian Campaign.

Contains map, portraits, and illustrations from the author's drawings.

Both volumes are ex-library. They have the usual library stamps and cards. Green decorative cloth boards, gilt decoration to spine. In good condition with slight foxing throughout.

Lady Anne Blunt was a traveller and breeder of Arab horses, and the granddaughter of Lord Byron. "With [her husband] Blunt she travelled extensively in the Middle East: her scientific interests are manifest in the mass of aneroid readings, barometric pressures, and compass bearings in her journal entries of their travels in the Arabian deserts. There she found happiness, and her numerous journals give a fascinating account of their experiences. Written simply as a private daily record, they provide frank insights into every aspect of her life, including her views on the political events in which her husband was involved.In 1882 the Blunts purchased a 37 acre walled garden outside Cairo.ady Anne became fluent in Arabic, and the insights she gained into the people and their customs ensured an encyclopaedic knowledge of the Bedouin and their horses. She also translated original Arab texts, two of which were put into verse by Blunt and published in England. Two travel books, The Bedouin Tribes of the Euphrates (2 vols., 1879) and Pilgrimage to Nejd (2 vols., 1881), despite appearing under Lady Anne's name, were not written by her. Purporting to be extracts from her journals, whole sections describing their travels were rewritten by Blunt." (Oxford Dictionary of National Biography). HBS 67910. 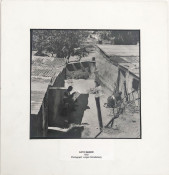 ORIGINAL JURGEN SCHADEBERG PHOTOGRAPH - CATO MANOR 1952 - PLUS BOOK 'THE WAY I SEE IT'.