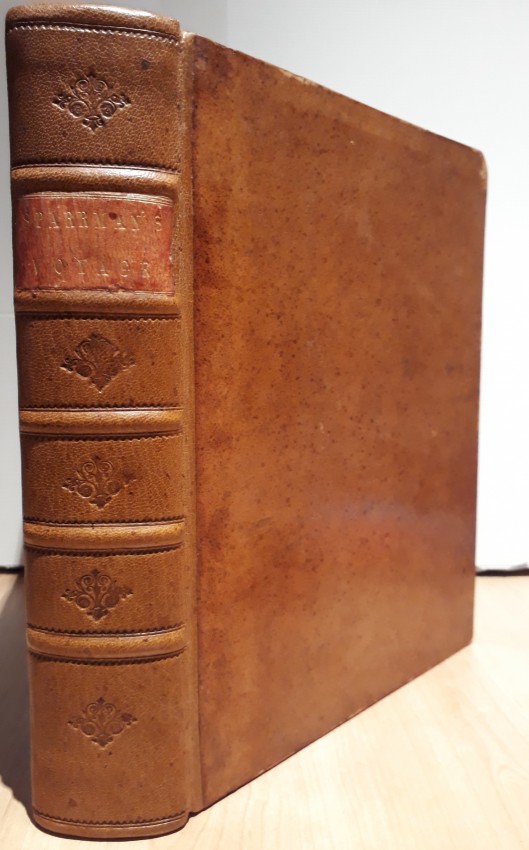 A Voyage to the Cape of Good Hope

towards the Antarctic Polar Circle and round the world but chiefly to the Country of the Hottentots and Caffres from the year 1772, to 1776

George McCall Theal wrote of Sparrman's book: "the most interesting and the most trustworthy account of the Cape Colony and various races of people then residing in it, that was published before the beginning of the nineteenth century".

Two volumes bound in one: the 1785 translation into English of Anders Sparrman's travels to and in the 'Cape of Good Hope' and aboard Capt. Cook's Resolution (1772 - 1776). This book belonged to  Alpheus Fuller Williams, the mining engineer who became general manager of De Beers Consolidated Mines (1905 - 1931).

Vernon Forbes, the geographer, wrote: " the first full-length personal account of travels in the far interior of Southern Africa. "lucidly stated experiences, observations and opinions of an honest, keen and accurate observer ... the importance lay in the first-hand and veracious accounts he wrote of all he saw in regions which hitherto had been a veritable terra incognita."

Sparrman's book first was published in 1783 in Swedish and then translated into German, English (four editions), Dutch and French. This book comprises the two volumes of the first English edition; it has all the illustrations and also his landmark map (as directed, these are bound at the end, apart from the frontispiece: a prospect of the Cape of Good Hope).

The pages are clean and the binding is tight. There is minimal foxing of the illustrations. The map is without any tears, despite being printed on relatively flimsy paper - there is a small stain on the inset of False Bay. There are marginal water stains on the pastedowns and flyleaves and frontispiece. A very good volume.