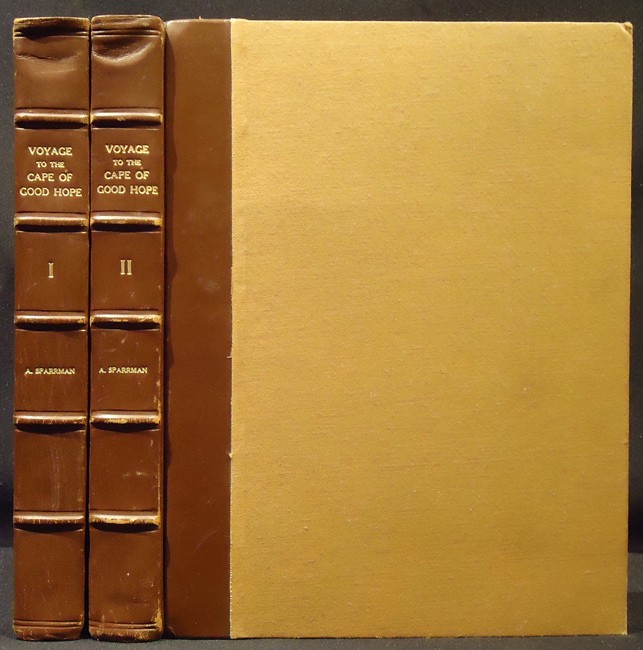 But chiefly into the Country of the Hottentots and Caffres, from the year 1772 to 1776.

By Andrew Sparrman, M.D., Professor of Physic at Stockholm, fellow of the Royal Academy of Sciences in Sweden, and Inspector of Its Cabinet of Natural History.

Translated from the original Swedish.
First English edition: 2 volumes, I. xxvii, 368. II. viii, 350, (ii errata and directions to the book-binder), pages, copper engraved frontispiece in volume 1, 9 engraved plates bound at the end of each volume, folding map, quarter brown leather with brown cloth sides, bookplates on both paste-down endpapers and a corresponding small stamp below the dates on the title pages. The leather is worn along the edges and on the raised bands, the folding map is torn at the first fold, pencil annotations in the margins throughout both volumes and with a page of pencil notes loosely inserted in each volume, light offsetting and foxing on the plates but overall the contents are in very good condition.

Mendelssohn (S.) South African Bibliography, volume 2, pages 414–5,  'On his arrival at the Cape on January10, 1772, Sparrman had only the small sum of twenty-five rix dollars in his possession, but the kindness of his reception and the hospitality of the colonists enabled him to pursue his researches and his expenses on his short expeditions were defrayed by the Swedish East India Company. About the latter end of the year, the English Exploring Expedition under Captain Cook visited Table Bay, and Sparrman was invited to accompany it and he sailed in the Resolution on November 22, 1772. He did not return to South Africa until March 1775, when he determined to make an expedition into the interior with a friend named Immelman, and they made a start on July 25, the journey being extended to April, 1776. They penetrated through Kaffararia as far as "Bruntjes Hoogte," and the narrative of their travels is interesting and instructive, and is described by Mr Theal as the "most trustworthy account of the Cape Colony and the various races of people residing in it" that had been published in the eighteenth century. Sparrman died at Stockholm in 1820 at the age of 73; his work, originally written in Swedish, was translated and published in French, English and German and went through several editions.’