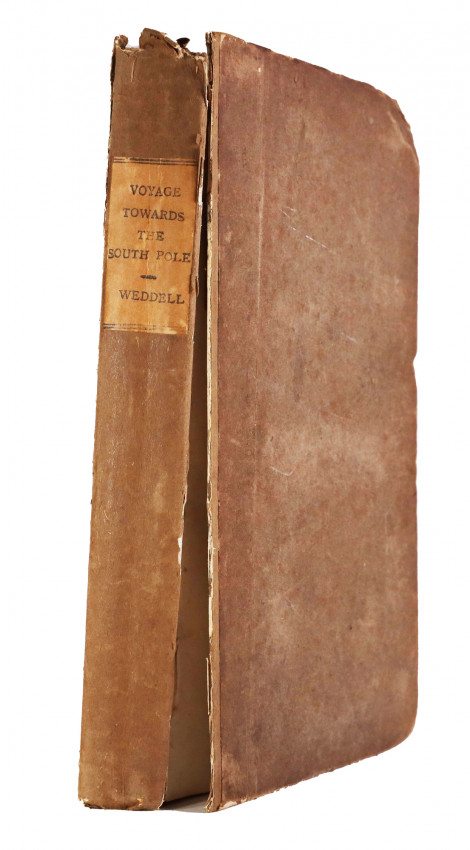 A VOYAGE TOWARDS THE SOUTH POLE

Containing an Examination of the Antarctic Sea, to the Seventy-Fourth Degree of Latitude:

and A Visit to Tierra del Fuego, with a Particular Account of the Inhabitants.

To Which is Added, Much Useful Information on the Coasting Navigation of Cape Horn, and the Adjacent Lands, with Charts of Harbours, &c.

With observations on the probability of reaching the South Pole and an account of a second voyage performed in the Beaufoy, Captain Brisbane to the same seas.

Second edition: iv, 324 pages, coloured aquatint frontispiece, 8 maps and charts - 6 folding, 4 plates, 2 plates of coastal profiles at the back of the volume, book plate on the front paste down end paper, some light foxing, uncut edges, original brown paper covered boards with a paper title label on the spine, the front cover is detached, a good copy.

James Weddell FRSE (24 August 1787 – 9 September 1834) was a British sailor, navigator and seal hunter who in February 1823 sailed to latitude of 74° 15′ S - a record 7.69 degrees or 532 statute miles south of the Antarctic Circle - and into a region of the Southern Ocean that later became known as the Weddell Sea.

On his third voyage from 1822 to 1824, Weddell again commanded the Jane, while the captain of the Beaufoy was one Matthew Brisbane. Together they sailed to the South Orkneys again. Sealing proved disappointing, though, and after searching for land between the South Shetlands and the South Orkneys (and not finding any), they turned south in the hope to better sealing ground. The season was unusually mild and tranquil, and on 20 February 1823, the two ships had reached latitude 74°15′S and longitude 34°16′45″W (−74.25, −34.279): the southernmost position any ship had ever reached up to that time. A few icebergs were sighted, but there was still no sight of land, leading Weddell to theorize that the sea continued as far as the South Pole. Another two days' sailing would have brought him to Coats Land (to the east of the Weddell Sea), but Weddell decided to turn back. His Voyage to the South Pole was first published in 1825. https://en.wikipedia.org/wiki/James_Weddell