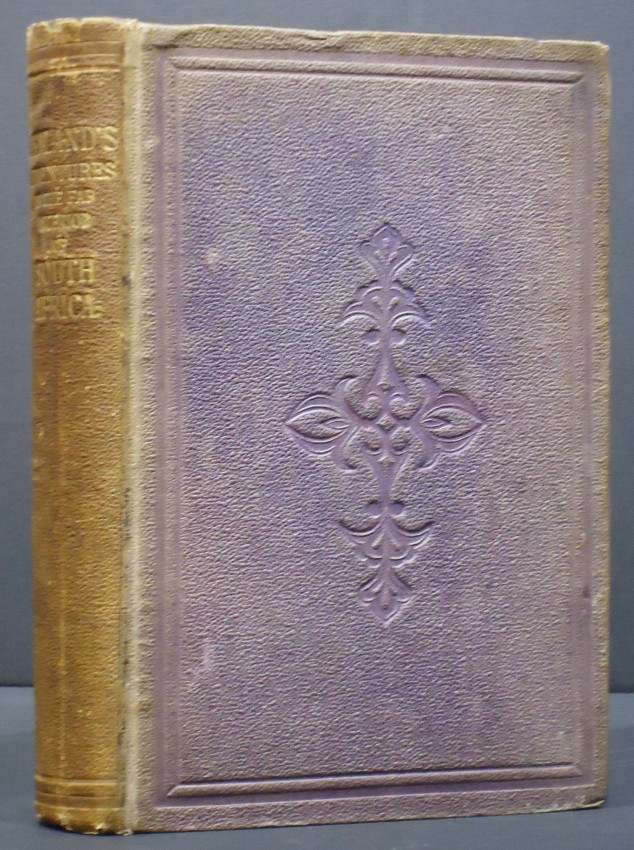 ADVENTURES IN THE FAR INTERIOR OF SOUTH AFRICA

Including a Journey to Lake Ngami and Rambles in Honduras

To which is appended a short treatise on the best mode of skinning and preserving birds, animals, etc., also receipts for making preservatives.

First edition: vii, 283 pages, frontispiece, 18 plates, original blind stamped brown cloth titled gilt on the spine, which has been simply repaired, foxing throughout and on the plates, the pages have been clumsily opened at the top edge, ownership mark on half title page, a good copy.

Mendelssohn (Sidney) South African Bibliography, volume 1, page 897: 'An account of three journeys in South Africa in the middle of the nineteenth century (1848-1852). The author arrived in Algoa Bay in September 1848, and two months later proceeded to "Graham's Town", where he remained for ten months, engaged in "shooting, collecting, and preserving birds." He then journeyed to Graaff-Reinet, where a hunting expedition was planned to Lake N'gami, but some dissensions breaking out among the party, the trip was abandoned, and Leyland, and Mr. Nicholson (author of "The Cape and its Colonists," who formed one of the expedition) returned to Algoa Bay. The next trip was started from Graaff-Reinet, on May 18, 1850, and the author evidently endeavoured to combine trading with shooting, but was not very successful in the former direction, he enjoyed, however, excellent sport, meeting lions, hyenas, and all kinds of antelopes, and obtaining a large number of natural history specimens.

On his return he stayed for some time at Colesberg, where he became acquainted with Mr. S. Edwards, son of the well-known missionary of that name. They agreed to go to Lake N'gami, and started on their journey on October 26, 1850. En route they visited Dr. Livingstone, then stationed at Kob^Jeng, and saw something of the disturbed state of the country, the result of the disputes of the Boers with Secheli, and of the Kaffir War of 1850. They arrived at the lake on July 13, 1851, and remained in the district till about the end of the year, hunting and trading and obtaining knowledge with respect to the inhabitants and fauna of the country, subsequently, Mr. Leyland returned to Algoa Bay. The volume possesses many notes respecting the game and wild animals and birds of South Africa, with references to Dr. Livingstone and other travellers and missionaries encountered in the journeys.'

John F. My Journey to Medinah: Describing a Pilgrimage to Medinah.

Syria, the Holy Land, Asia Minor, &C. Illustrated: In a Series of Views Drawn from Nature.