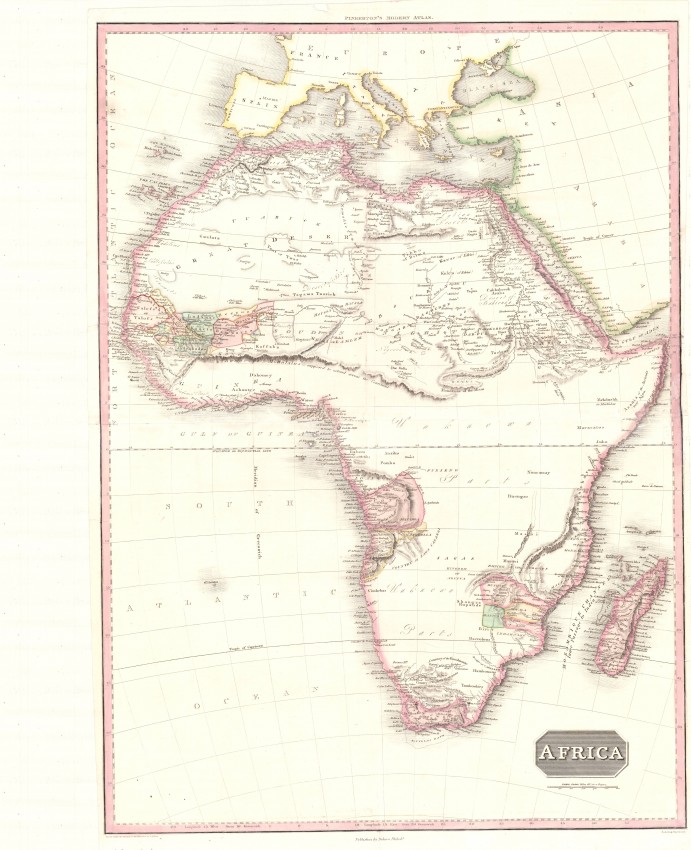 Pinkerton’s map of Africa, is arguably the best detailed map of Africa from the period - and superior to the maps of Cary and Thomson. The map is from the scarce, folio-sized Pinkerton's Modern Atlas. The map comprises two sheeta that have been joined.The highly regarded L. Hebert Snr., from the Colonial Office, worked with Pinkerton in designing the map – confirmation of Pinkerton’s attention to the latest information.

The map is from the special edition of Pinkerton’s Modern Atlas published by John Dobson in Philadelphia;The engraver was well-known Samuel Neele.John Pinkerton (1758-1826) was one of the leading Scottish cartographers who abandoned the elaborate decorations of the previous century and focused on accurate information from Africa. Nevertheless, this map's geography is transitional – in contrast to some up to date information, parts of East Africa reflect unchanged information from earlier maps.

Among the interesting features is the location of "Azania of the Ancients", now Ajan, today Somalia, about Mogadishu.  In showing the origin of the Blue Nile in Ethiopia, he did not show Lake Tana but added the annotation “Source of the Nile according to Bruce”. Similarly, his Lake Maravi (i.e. Malawi, but AKA Lake Nyasa) shows a ghost image extension to the north - the northern reaches of the lake had not yet been discovered.  This is one of the maps that show the legendary Mountains of Kong in West Africa – and Pinkerton’s annotation differ from Cary in that it reflect his doubt about their existence.

The map is printed on heavy paper; there are a few small marginal tears that have been professionally repaired and a small area of loss at the top that is being repaired; the map is closely trimmed near equator on the right.