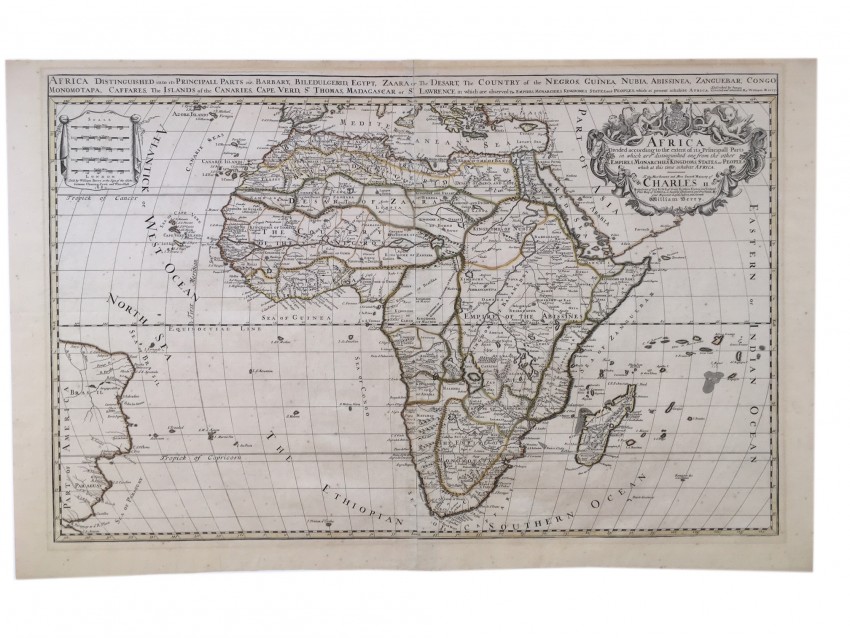 according to the extent of its Principall Parts in which are distinguished one from the other Empires, Monarchies, Kingdoms, States and Peoples which at this time inhabit Africa.

William Berry. Africa divided according to the extent of its Principall Parts in which are distinguished one from the other Empires, Monarchies, Kingdoms, States and Peoples which at this time inhabit Africa. London, William Berry at the sign of the Globe between Charing Cross and Whitehall, 1680.

"This is a rare map" (Betz). This is the sole state of this large, separately published and beautiful English map of Africa. It was dedicated to "the most serene and most sacred majesty of Charles II, by the grace of God, king of Great Brittain, France, and Ireland, this map of Africa is humbly dedicated and presented by your majesties loyal subject and servant, William Berry". No. 56 of 69 maps bound together in composite atlas. The richly engraved cartouche is surmounted with the Royal Arms, and it depicts a lion, an ostrich, an elephant, a crocodile as well as classical and native figures.

According to Roger Stewart (with thanks for supplying the information), "This very uncommon map was created by William Berry based on Alexis-Hubert Jaillot's 1674 map of the continent of Africa, which itself was based on Sanson's second map of Africa (1668). The map presents the standard Ptolemaic description of the source of the Nile. However, Jaillot introduced a new depiction of the rivers south of these Ptolemaic lakes. The Zambezi River appears above the Zambere and Rio de Spiritu Santo, all of which flow into the Indian Ocean. A large section of South America is shown and two St. Helena islands appear - a common error in maps from this period. The large distance scale cartouche has five scales (in contrast with Jaillot's map, which has 6 scales). The very large and decorative title cartouche, also copied from Jaillot, includes a tumult of figures, cornucopias, elephant, crocodile, lion and ostrich, although Berry changed the coat of arms to that of the Royal Arms. Berry did not issue standard atlases, but rather issued his maps in untitled collections. Even so, very few examples of his "atlases" have survived, and his maps are exceedingly rare. Two sheets are joined, as published." (email, 5th August, 2018).

Map, 54 x 89cm, slightly coloured. Scale in English and Italian miles, French, German and Spanish leagues. Prime meridian through Ferro Island.Dedication: "To the most Serene and Most Sacred Majesty of Charles II".Title across top: Africa distinguished in its principal parts viz. Barbary, Biledulgerid, Egypt, Zaara or the Desert, the Country of the Negros, Guinea, Nubia, Abissinea, Zanguebar, Congo, Monomotapa, Caffrares, the Islands of the Canaries, Cape Verde, St. Tomas, Madagascar or St. Lawrence…Described by Sanson. Corrected and amended by William Berry. Norwich’s Maps of Africa #47.

Condition: Near Fine. Decent margins around plate, light foxing in the Atlantic Ocean, small abrasion causing a gap in the outline of Madagascar Island.