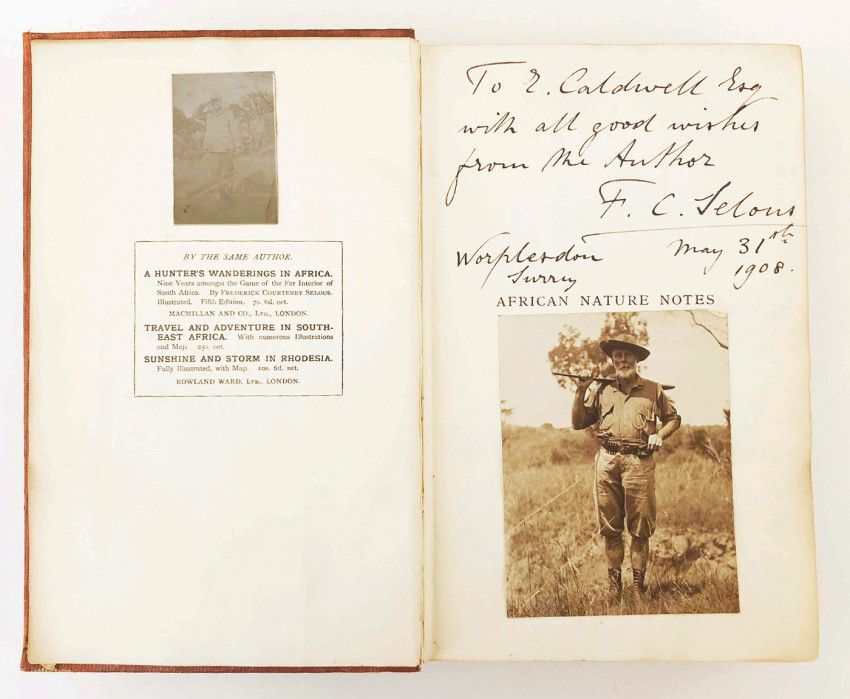 The first edition of this Selous title in the original rust coloured cloth. 8vo. 356pp. 9 page Foreword by President T. Rooseveld, to whom the book is also dedicated. 10 full page monochrome plates, being illustrations by Edmund Caldwell and 3 full page photographs picturing a struggle between a Rhinoceros and a Crocodile.

The front and rear cloth covers have fairly extensive patchy fading, probably from damp, but there is no evidence of damp damage internally and the book is otherwise in about very good condition, with the special features noted below.

This copy is an important Association Copy, inscribed on the half-title page by Selous to the illustrator, Edmund Caldwell. It is dated May 31st. 1908, Worplesdon, Surrey. Several original photographs are tipped in to the book as follows:

- Beneath the inscription on the half-title is a nice image of Selous in hunting attire with a rifle over his shoulder.

- On the page opposite the half-title is a small somewhat faded image, probably also of Selous.

- On the verso of the front free endpaper is a nice image of a young soldier standing next to a seated General Jan Smuts. I think this is probably Selous’s son, Frederick Hatherley Bruce Selous, who was later killed in action in 1918 (a year after his father’s death in action).

- On the rear pastedown is a nice image of a seated General Smuts, flanked on either side by two standing gentlemen, one of whom is probably Selous. Beneath the photo, is annotated in pencil “The last photo at Inja”.

Also tipped in to the book on the front free endpaper is a contemporary news clipping of Selous’s death in battle and on the verso of the rear free endpaper, a printed reproduction of a photograph of Selous’s grave.

Given the importance of the inscription, association and provenance, the staining of the covers seemingly pales into insignificance.

Edmund Caldwell (1852 - 1930) was a British painter , illustrator , sculptor and etcher . He was best known for his animal watercolours and landscapes, but his specialty was domestic dogs. Today he is almost certainly best remembered as the illustrator of Jock of the Bushveld, published the year before this Selous title.

A MANUAL FOR THE GUIDANCE OF JUSTICES OF PEACE

NARRATIVE OF AN EXPLORATORY TOUR