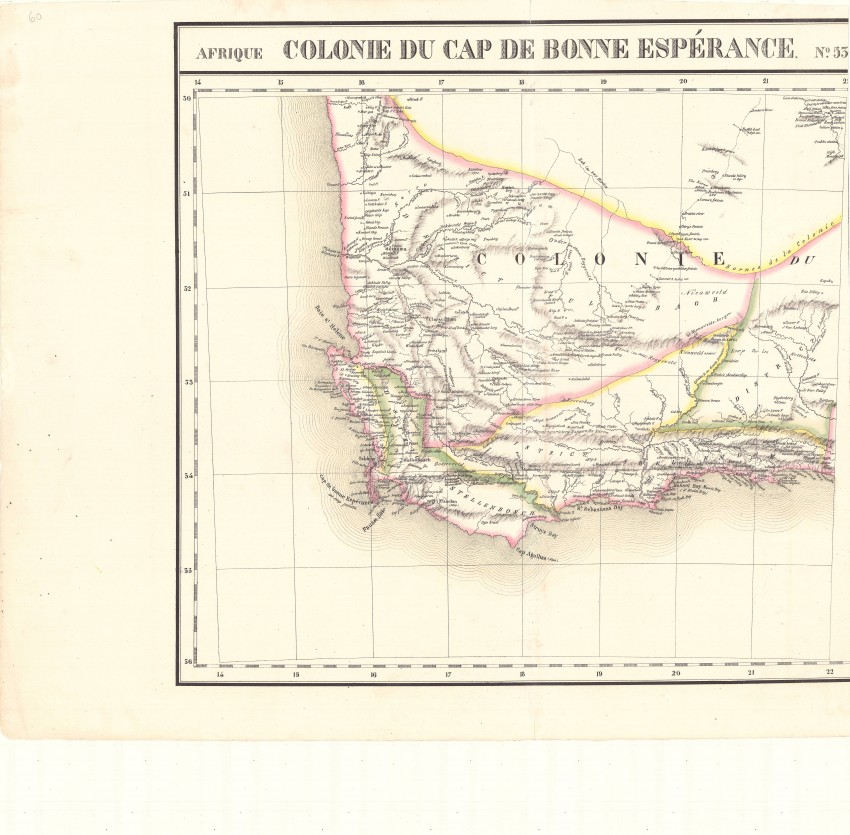 This lot comprises two maps that were drawn as gores that would fit on a globe of the earth >7m in diameter:

Please read the blog post for more information on Vandermaelen, his atlas and maps; his maps are not included in the cartobibliographies of Tooley or Norwich.

These two very scarce and historically important maps have been reversibly joined - if they were to be position on a globe, the headlines would be removed and the maps would be joined along the lines at an acute angle to the longitude axis - see the image of the maps joined to so that they can be framed conventionally - the western map has been trimmed at the right (eastern) border to facilitate joining of the maps so that they can be appreciated as a whole on a flat surface.

The Cape Colony of the first half of the 1820s is depicted on these two very scarce maps of Philippe Vandermaelen’s Volume III from his Atlas Universel. The maps were early examples of fine lithography, and Vandermaelen's atlas was the first lithographed atlas of the world. The beautiful outline colouring of the maps was done by hand.

The maps show the route and stations of William John Burchell, who travelled extensively in the colony: he departed Cape town in 1811, visited the eastern border region in Cape in 1813 and returned to Cape Town in 1815. His map was published in 1822, four years before Vandermaelen published his own maps.

The maps are in fine condition; the eastern map has a small stain at the margin, outside the plateline: the paper is heavy and firm, the imprint dark and the excellent outline colouring has not faded.

These scarce maps will be a scarce a beautiful addition to any collection of historical maps of the Cape Colony and / or southern Africa.