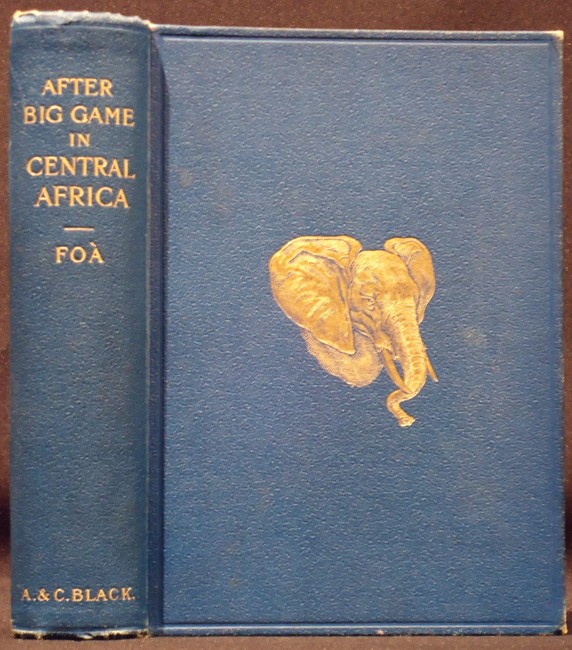 AFTER BIG GAME IN CENTRAL AFRICA

Records of a sportsman from August 1894 to November 1897, when crossing the dark continent from the mouth of the Zambesi to the French Congo.

Translated from the French with an introduction by Frederic Lees

330 pages, frontispiece portrait, 29 plates, 36 text illustrations, pictorial blue cloth gilt, decorated with the head of an elephant in gilt on upper cover, top edge gilt, a previous owner, George Billings, has stamped his name on the half-title page and on several other pages in the text (see illustrations below), a very good copy.

Czech (Dr. Kenneth P.) An Annotated Bibliography of African Big Game Hunting Books 1785-1999 (Second enlarged edition, Trophy Room Press, 2011), page 98, 'Foà, a Frenchman, hunted from coast to coast across central Africa with numerous sporting episodes, After a lengthy dissertation on choosing a rifle and cartridge, the author proceeds to describe his hunts for buffalo, elephant, lion, leopard and other game in the Chiromo district. He continued to hunt elephant and hippopotamus as he travelled westward in 1895 into Barotseland. Entering the Congo, he bagged a wide variety of antelope as well as buffalo, and more elephant. Among his trophies was an enormous elephant sporting tusks at 114.5 pounds each.'