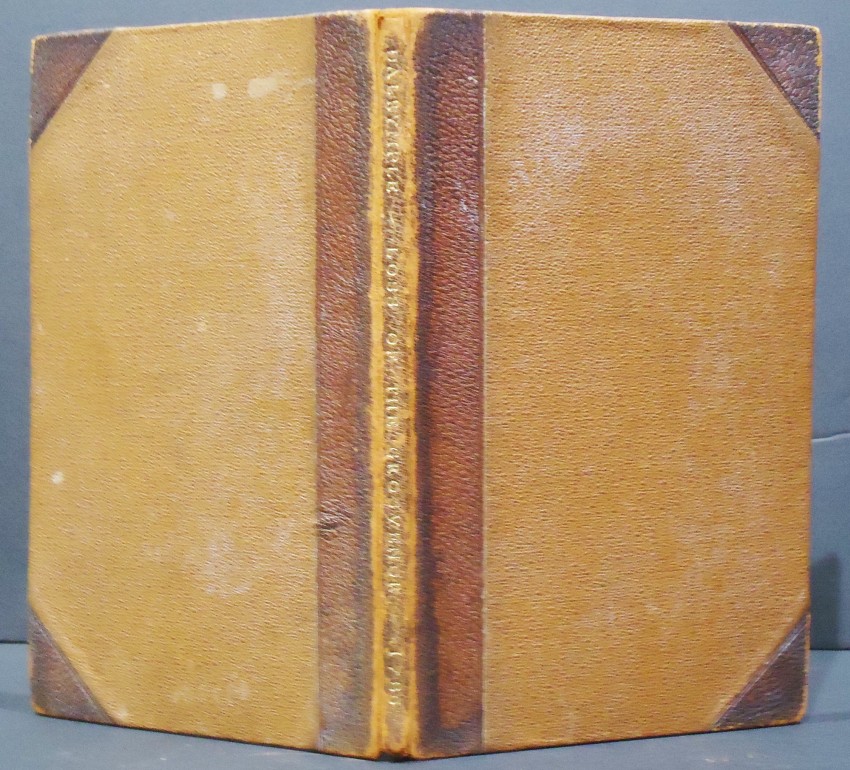 AN ACCOUNT OF THE LOSS OF THE GROSVENOR INDIAMAN

Commanded by Capt.John Coxon on the 4th August 1782

(inferred from the Poruguese description of the coast of Africa to have happened betweenm28 and 29S. ) with a relation of the events which befel those survivors who have reached England viz. Robert Price, Thomas Lewis, John Warmington and Barney Larey.

Being the report given in to the East-India Company by Alexander Dalrymple Esq.

Published with the approbation of the Court of Directors.

New edition. [i,] 58 pages, half title page, rebound in half brown leather with matching pebble grained cloth boards, titled gilt on the spine, which is faded and worn, book plate of Hans Sauer on the front paste down end paper, half title page, starting to wear at the front hinge, a good copy.

Mendelssohn (Sidney) South African Bibliography volume 1 page 650: Four of the rescued crew of the Grosvenor were examined in London by Mr. Dalrymple, at the request of the Chairman of the East India Company, Sir Henry Fletcher. Of the four, Price and Larey went in one party, Lewis in another, and W'armington in a third, but their accounts do not clash, and in the main agree with the narrative written by George Carter. There is a list of the Captain's party, numbering forty-five people, none of whom were ever heard of again, with the exception of two black maid servants ; and another list containing the names of twenty individuals, in which part}- Price and Larey remained ; and a third, which included at the time Lewis and Warmington.

Five other men were fortunate enough to survive the hardships and perils of the journey : Evans, who remained at the Cape, and Hynes, De Larso, Feancon, and Hubberly, who went to Copenhagen. On the arrival of the survivors at Swellendam, an expedition was fitted out by order of the Governor and Council of the Cape, to go to the wreck ' ; in quest of more of the people who were saved." The party was under the command of Captain Miller (Hillegard Miiller), and consisted of 30 or 40 waggons and horses, with tents, and about 100 Europeans and 300 Hottentots. (See Theal's " History of South Africa, 1691-1795.") Evans and De Larso accompanied the party, but being opposed by the natives and the horses being exhausted they had to retire. They discovered some lascars and the two black maids ; but Price stated that in the course of their journey they saw several dead bodies." According to Theal, the black maids and the lascars asserted that, " to the best of their belief, all the other shipwrecked people had either been killed by the Kaffirs or had perished of want and fatigue."