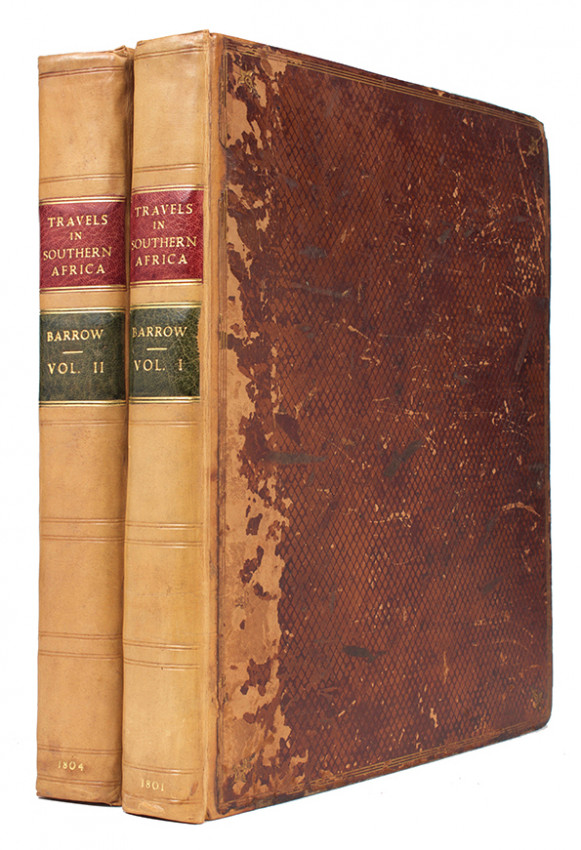 AN ACCOUNT OF TRAVELS INTO THE INTERIOR OF SOUTHERN AFRICA

In the years 1797 and 1798: including cursory observations on the geology and geography of the southern part of that continent; the natural history of such objects as occurred in the animal, vegetable, and mineral kingdoms; sketches of the physical and moral characters of the various tribes of inhabitants surrounding the settlement of the Cape of Good Hope.

To which is annexed a description of the present state, populations, and produce of that extensive colony; with a map constructed entirely from actual observations made in the course of the travels.

First edition: 2 volumes: I. viii, 419, (i publishers list). II. xi, (i errata), uncancelled library stamp on the title page, 452 pages – p.451 -2 with a small hole above the text, folding aquatint plate with sepia tint of 'Entrance to Cape Town from Green Point' as frontispiece in volume 2, large folding map in volume 1, which has been simply reinforced with tape, and has begun to detach, 8 smaller maps - two partly coloured and folding - one the Military Plan of the Cape Peninsula, several with uncancelled library stamps on the back, original full leather binding which is very scuffed and worn, rebacked with later tan leather spines with red and brown title labels, some light offsetting from the maps and foxing in the text, the contents are in good condition.

Volume 2 has a separate title page with title: An account of travels into the interior of southern Africa. In which is considered, the importance of the Cape of Good hope to the different European powers, as a naval and military station: as a point of security to our Indian trade and settlements during a war, and as a territorial acquisition and commercial emporium in time of peace: with a statistical sketch if the whole colony; compiled from authentic documents

Mendelssohn (Sidney) South African Bibliography volume 1 pages 87 - 88. Barrow was attached to the staff of the Earl of Macartney, one of the governors of the Cape Colony during the first occupation by the British. Barrow accompanied an expedition from Cape Town to Graaff-Reinet, and another to Namaqualand, and he gives an excellent description of the country traversed, particularly with regard to the botany and zoology of these regions. He provides significant evidence of the alleged brutality of the Boers to their slaves and Hottentot servants, and there is a description of the characteristics, habits, and customs of the various native races. The second volume deals with the importance of the country from a military and naval perspective.

Framed Signed Portrait of HRH The Prince of Wales 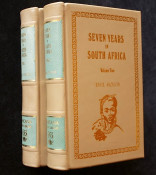