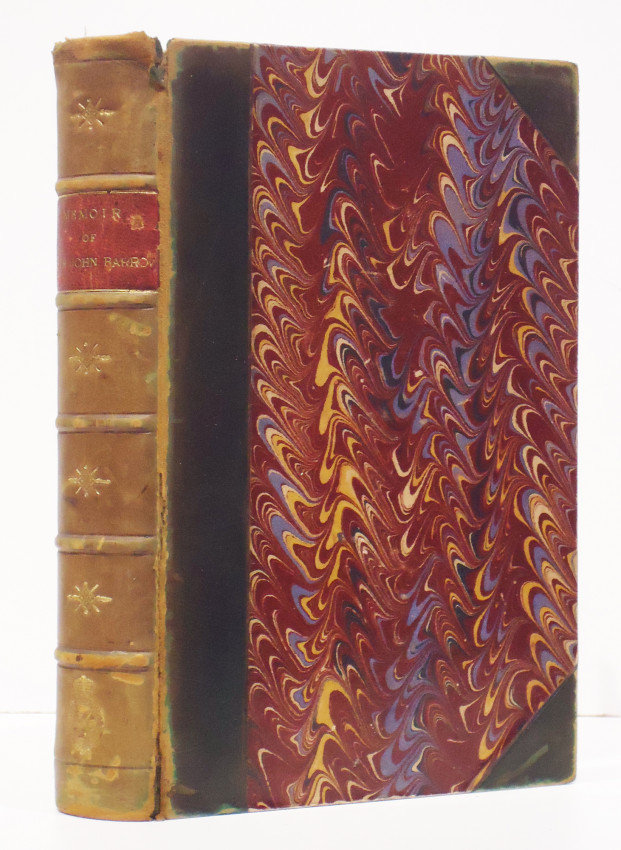 Including reflections, observations and reminiscences at home and abroad from early life to advanced age.

First edition:xi, 515 pages, frontispiece portrait, front hinge is worn, rebound in half leather with matching marbled boards, red title label gilt on the spine – which is starting to split at the top and the bottom, book plate on front paste down end paper, a good copy.

Mendelssohn (Sidney) South African Bibliography vol. 1 page 89 - 90: Mr. Barrow was born in 1764, and his first appointment of importance was that of Comptroller of the House to the suite of the Earl of Macartney, who had been appointed Ambassador Extraordinary and Plenipotentiary to the Emperor of China, in 1792. There is an interesting account of the Embassy, and in addition the author published a work entitled " Travels in China," which more fully details the adventures of the tour and stay in that country. In 1796 Lord Macartney was appointed Governor of the Cape, and he chose the author as one of his private secretaries, and after some delay the Governor and his staff arrived in Cape Town on May 4, 1797.

Shortly after their arrival it was found necessary for someone in authority to proceed to Graaff-Reinet, where the Boers were in a state of semi-rebellion, and had maltreated and expelled the Landrost and the clergyman. Lord Macartney asked Mr. Barrow to go, in order " to accompany one or both of these gentlemen to the presence of these savages. ... I have preferred," said the Governor, " to send one of my own family rather than at once bring them to their senses by a regiment of dragoons." He also asked the author to endeavour to compile a proper map, as "we have no map that embraces one-tenth of the colony." ….There is a short account of the trip to Namaqualand, and on his return from his expedition the author was appointed " Auditor-General of Public Accounts, Civil and Military," which gave him an advance in his salary of over £500 a year.

Soon after this his large work, Travels in South Africa, was published, Sir G. Staunton carrying out the negotiations with the publishers, who paid £900 for the copyright. Lord Macartney left the Cape in 1798, and soon after Mr. Barrow married Miss Anna Maria Truter, a lady connected with some of the leading families at the Cape. On the retrocession of the country to Holland the author proceeded to England, arriving in 1803. He was afterwards appointed " Second Secretary to the Admiralty," and served through thirteen administrations during a period of forty years. He was made a baronet in 1835 and retired in 1845.