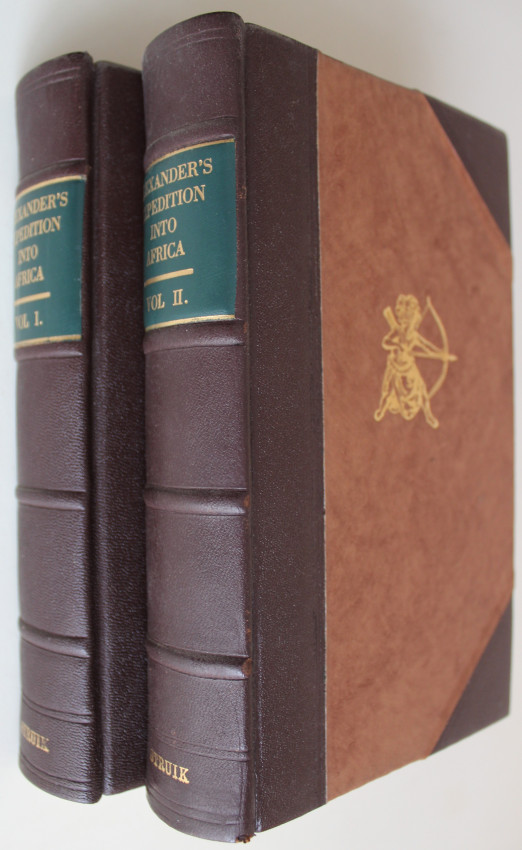 An Expedition of Discovery into the Interior of Africa

Sir James Alexander fully intended carrying out his intention of exploring part of Eastern Africa, but as he was forestalled by Dr. A. Smith he decided to pursue his investigations in the West. With this view he proceeded to Namaqualand and Damaraland, which countries were little known at this time. Leaving Cape Town in 1816, he traversed these regions in an ox waggon, and went through a large part of the country now known as German West Africa, arriving at Walvisch Bay almost exhausted with the difficulties of travel and want of water. He draws attention to the education of the natives by the missions, through the medium of the Dutch language, which he considers a mistake, and states that the Damaras have no religious belief. He had a good deal of hunting throughout his journey, and was successful in providing food for his large party. He succeeded in obtaining a good collection of zoological and other specimens, many of which were at that time unknown to the scientific world. These volumes contain an account of the social conditions of the Namaquas, Boschmans, and Damaras, several illustrations, a map of the route of the author's expedition, and the Appendix includes a note upon the Cape Colony.

This 2 volume set is volume numbers 22 + 23 of the Africana Collectanea Series. This edition was limited to 750 numbered copies, of which the first 50 were bound in the "de luxe" style.

Original brown leather spines and corners with green title labels on the spines with gilt titling and the publisher's device on the upper boards. Volume 1 has 6 prelims followed by a facsimile of the 1838 Henry Coplburn London edition with xiii prelims, 302 pages, folding map, and 6 illustrations. Volume 2 has 6 prelims, followed by the facsimile with viii prelims, 331 pages and 8 illustrations.  Volume 1 has a book seller's label on the front paste down.

A VOYAGE ROUND THE WORLD,

In the Shadow of the Bush