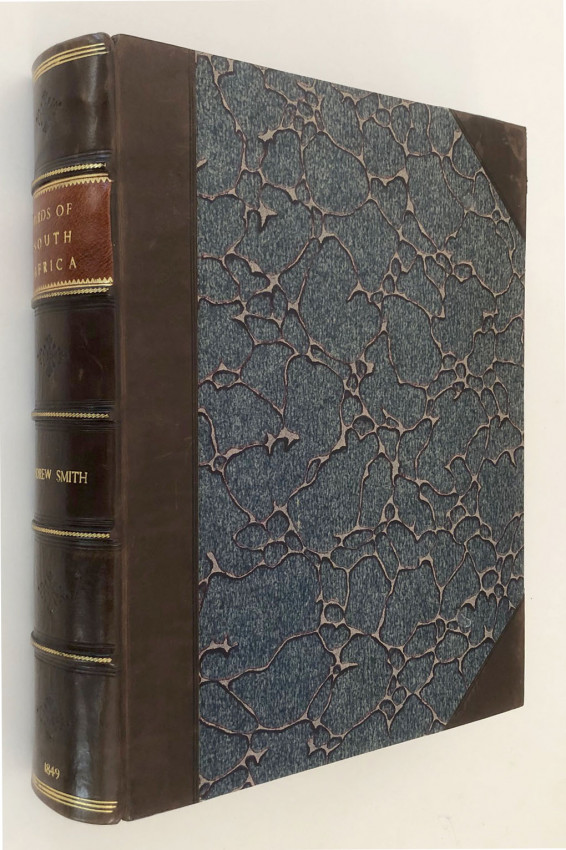 A magnificent copy of the scarce first edition of this wonderful book with 114 fine hand coloured plates after George Henry Ford. Arguably the most lavish and desirable of the five volumes of Andrew Smith's fine work and one of the great bird books of the world. 1849. Smith, Elder & Co. 4to. Unpaginated, but each of the 114 plates has an opposing page of descriptive letterpress, with tissue guards. Bound in later half morocco and marbled boards. The spine has five raised bands creating six compartments with gilt and blind tooling and titles.

Condition. The title page has minimal marginal discolouration but otherwise, both internally and externally, this is a fine copy, without foxing, of this major work.

Sir Andrew Smith KCB (3 December 1797 – 11 August 1872) was a Scottish surgeon, explorer, ethnologist and zoologist. He is considered the father of zoology in South Africa having described many species across a wide range of groups in his major work, Illustrations of the Zoology of South Africa.

Smith met the young geologist Charles Darwin when the second voyage of the Beagle touched at the Cape in May 1836, and showed him slate rock formations. He also gave Darwin some rock samples he had collected the year before. These are now held by the Sedgwick Museum of Earth Sciences. Darwin and Smith corresponded about how the large animals in South Africa lived on sparse vegetation, showing that a lack of luxuriant vegetation did not explain the extinction of the giant creatures whose fossils Darwin had found in South America. Darwin frequently mentioned Smith in his writings, and sponsored him to gain membership of the Royal Society in 1857.

Please note that this is a very heavy book and shipping outside of South Africa will be expensive. Smith, Elder & Co.

The Paintings of NORMAN LIGHTON for Roberts Birds of South Africa. Signed & Numbered 34 of 300&hellip;