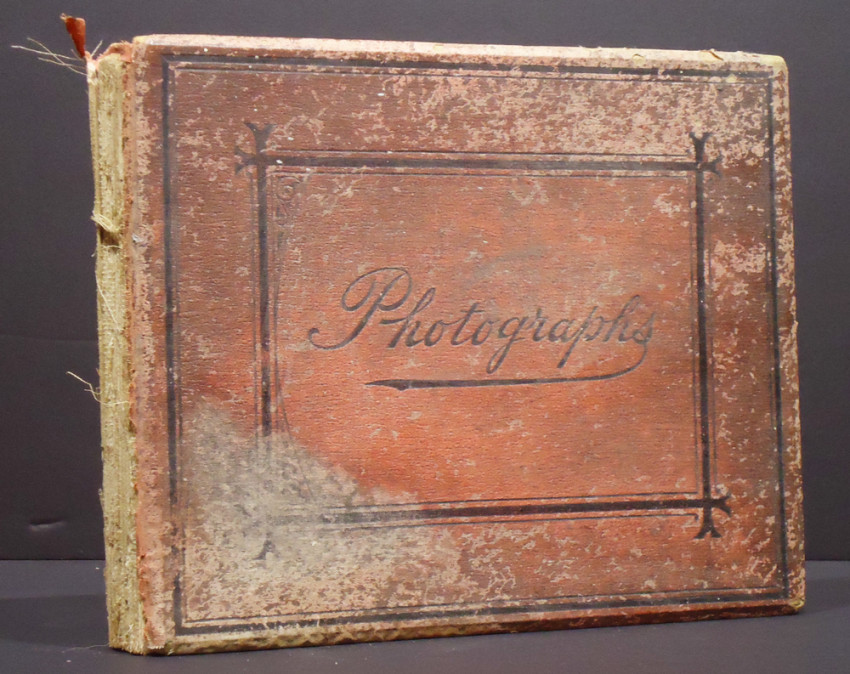 Photograph album with the contents detached from its covers. Original red cloth covers insect scarred with the word Photographs printed in black on the upper cover.

There are 25 unnumbered pages in the album containing 93 original Kodak photographs (6 x 8.5cm) – all sepia toned. The photographs have no captions and no dates – several have fallen out of their allotted spaces on each page. The photographs are in good condition and cover various aspects of the Boer War.

There are images which depict the following:

There is one larger photograph (11 x13cm) loosely inserted with the caption on the back March 17 1907 St. Patricks Day Hout Bay depicting a group of soldiers.

Military History Journal vol. 16 no 1 June 2013: With the invention of the half-tone process in the 1880s came the ability to reproduce photographs directly in print media. Fast on the heels of this printing revolution, in 1888, came the launch of Kodak's box camera, which used rolled paper film, and made the art of photography accessible (at a price) to all.

Specifically aimed at the amateur market, Kodak's cameras meant that at the outbreak of the Anglo-Boer War of 1899 -1902 many soldiers possessed cameras and used them freely at any opportunity. Coupled with a large number of professional photographers, commissioned by specialist magazines such [as]Black and White Budget or Navy and Army Illustrated, the number of cameras in that theatre of war means that there are today many more photographs from the Anglo-Boer War than from the Anglo-Zulu War of just twenty years earlier.

Indeed, the sheer number of photographers unfortunately means that many of their names are sadly now lost to history. Importantly, however, the reproduction of their photographs in print means that the historic images they took have fortunately survived.

The proliferation of photographic equipment near or even at the front line led to a number of early 'action' photographs being taken during the Anglo-Boer War. But still most photographers tended to capture largely posed subjects and static scenes. This perhaps limits the dramatic effect of such photographs to modern eyes, but it brings one major advantage: it is often possible to identify the precise spot at which the photographer stood while pointing his lens at a battlefield, and compare the scene he saw then with that same location today. This 'then and now' comparison can be further enhanced through the use of photographic software, which enables the historic and current day views to be superimposed to produce a 'blended' photograph that provides a window on a lost world.
http://samilitaryhistory.org/vol161sm.html