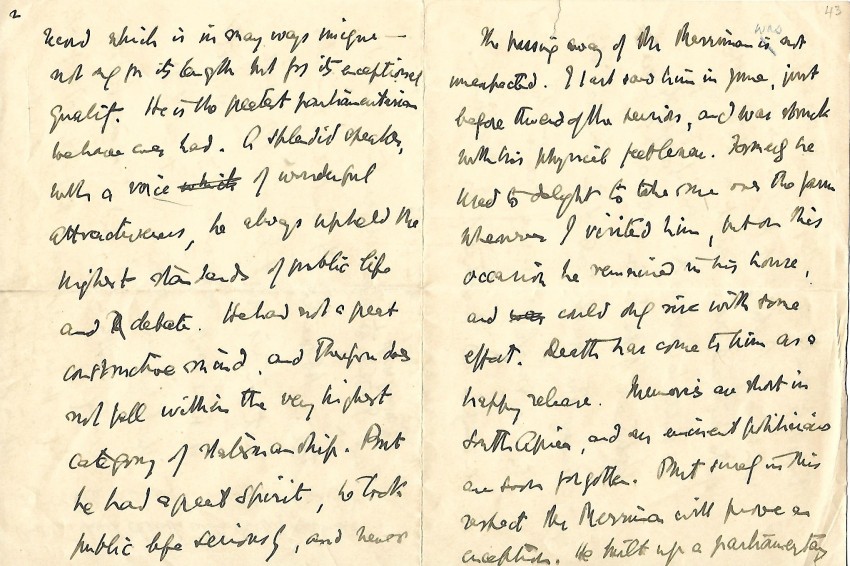 3 page autograph manuscript obituary by Smuts for John X. Merriman, presumably written shortly after his death on the 1st. August 1926, although undated and unsigned (but unquestionably in Smuts's hand). Probably published in a newspaper or possibly the basis of a speech in tribute to Merriman. Circa 300 words in English, written in ink with several autograph deletions and additions by Smuts.

In this moving document, Smuts extols the virtues of Merriman whilst also referring to his limitations. I have supplied images of all 3 pages, but here are some quotes:

"Memories are short in South Africa and eminent politicians (?) are soon forgotten but surely in this respect Mr Merriman will prove an exception. He built up a parliamentary hand which is in many ways unique - and not for its length but for its exceptional quality. He is the greatest parliamentarian we have ever had." "To our young members of Parliament he was ... an example of the high and noble spirit in which public life should be carried on. And if today the Parliament of the Union holds admittedly a high place among the Parliaments of the Empire, it is in no small measure due to the constant example and practice of Mr. Merriman". etc. etc. Please read the full document on the images provided.

An important manuscript representing the culmination of an important political and personal relationship.

John Xavier Merriman (1841 - 1 August 1926), was the last prime minister of the Cape Colony before the formation of the Union of South Africa in 1910. In 1904 he returned however, took over leadership of the new "South African Party" from his friend and ally James Molteno, and with Molteno and Sauer, led the opposition to the ensuing exclusively-British government of Leander Starr Jameson in the lead up to the crucial national elections of January 1908. In 1908 his South African Party together with the Afrikaner Bond won control of the Assembly and he served as Prime Minister of the Cape Colony for two years, from 1908 until the formation of the Union of South Africa on 31 May 1910. He was a leading figure in the National Convention which brought about this Union. Merriman had originally been proposed as the first Prime Minister of the new union, and several of the constituent states, such as the Orange Free State, supported him for this position. However Lord Gladstone, the first Governor-General, asked the Afrikaner statesman, Louis Botha to form a government. After union, he continued to serve in the Parliament of South Africa, representing first the constituency of Victoria West, and then Stellenbosch. He carried on a lively correspondence with Jan Christiaan Smuts, constantly warning him about possibilities of rebellion and civil war with Afrikaner sections of the white population who objected to South African cooperation with Great Britain against Germany in World War I, especially the South African invasion of German South-West Africa, now Namibia. He was one of only a few members of Parliament who opposed the Native Land Act in 1913, which was legislation that drastically limited African ownership of land.

In the Wet (1953 first edition with near very good dustjacket)