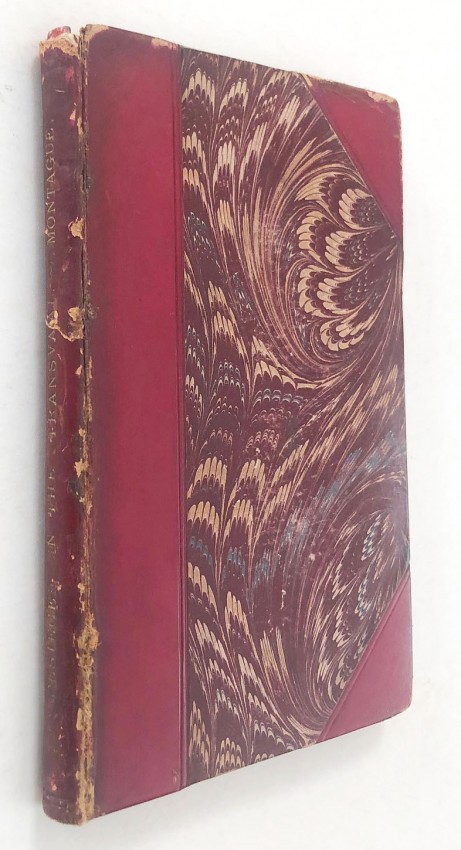 The rare first edition of this book. SABIB Vol. 3, Page 359. It was published in wrappers but this copy has been rebound in half leather and marbled boards with speckled edges and gilt spine titles. Small 8vo. 100 pages. The leather is moderately rubbed and there is 1-2mm. of loss at the top of the spine. The front pastedown bears the ex libris of Alexander McGrigor, possibly the bibliophile Alexander Bennett McGrigor. There is a suggestion of a second ex libris having been removed from the front free endpaper as evidenced by some minor abrasion on this page. Otherwise the book is internally very clean and bright.

The scarcity of this book is remarkable and it appears not to have been reprinted. I have only been able to trace one copy of this title appearing on the market recently, that being the copy in original wrappers sold on this site about 6 years ago -  Antiquarian Auction 33 - which fetched a remarkable $3,150.

This book covers the Siege of Standerton during the First Anglo-Boer 1880-1. On 20 December, 1880 two companies of the 94th Regiment (Connaught Rangers) under Captain Froom were on the way from Wakkerstroom to join their headquarters in Pretoria. After being stopped by a party of Boers, and also being worried about the fate of the garrison at Standerton, he decided to make for that town, the nearest British garrison. Major Montague of the 94th arrived at Standerton from Pietermaritzburg on 24 December to take command of the garrison, which consisted of 3 companies of the 94th (7 Officers and 250 men), one company of the 58th Regiment (1 Officer and 75 men), Mounted Infantry and volunteers (40 men), with a few sappers and men belonging to the Commissariat and Hospital Corps. The civilian population numbered 450. The garrison improvised a heliograph out of mirrors procured locally. They also constructed a large wooden dummy gun which apparently served a useful purpose and kept the enemy guessing. South of the town, the Vaal River formed a natural protection and forts were built on the surrounding koppies and outworks constructed. First shots were exchanged on 29 December. On 4 January, 1881 the garrison made its first sortie, the intention being to occupy Stander's Kop from where the enemy fire had proved annoying. An attempt to surprise the Boer piquet which occupied this height by day and was supposed to sleep in a farmhouse beneath the hill at night, ended in the raiding party being themselves surprised by a party of Boers. A second sortie was made by the garrison on 7 February when the mounted men attacked a small fortification occupied by about 60 Boers some two miles away: Reinforcements to the threatened fortification were ambushed by the raiding sortie. On 7 March the garrison repulsed a determined attack made by the Boers from the south. Officers bearing the official message from Sir Evelyn Wood rode into the town on 25 March, and so ended the siege, which lasted 88 days, bringing to a conclusion a well sustained resistance with casualties consisting of five killed - 2 privates of the 58th, one of the 94th, and two troopers of the mounted volunteers. From the Military History Journal (The South African Military History Society) Volume 5, No. 2, December 1980.