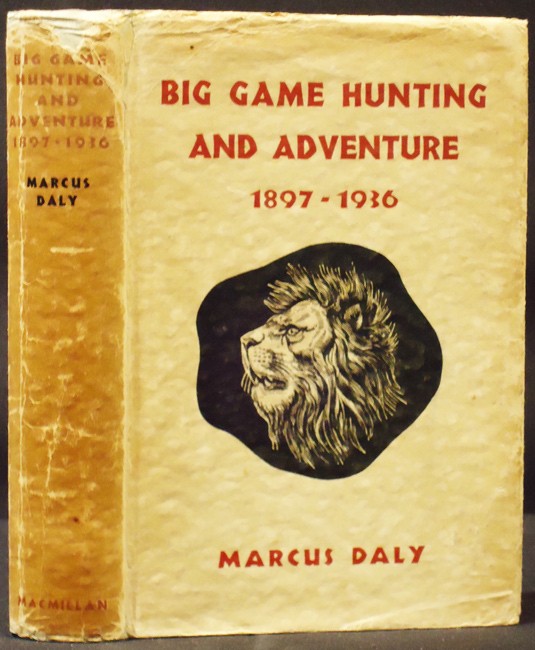 322 pages, frontispiece and 7 plates of photographic illustrations, original green cloth with a gilt vignette of a lion's head on the upper cover and titling on the spine, some light spotting on the page edges, bookplate of Ernest E. Testi on the front paste-down endpaper, a very good copy in the dust jacket which has been repaired along the inner top and bottom edges and is now protected with mylar.

Czech (Dr Kenneth) An annotated Bibliography of African Big Game hunting Books, 1785 to 1950, page, 73, 'With a career spanning nearly four decades, Daly hunted big game in various parts of Africa. Included are elephant hunts in Kenya and the Congo in the area of Tanaland and the Lower Wakamba, lion in Matabeleland, as well as safaris to French Equatorial Africa, the Sudan and Cameroons for all manner of game including gorilla. H maintains that of elephant, buffalo and rhinoceros, all are equally dangerous depending on what and where they are met. He includes interesting chapters on why game is disappearing, and on rifle selection and shooting.'

Included are photocopies of private correspondence, a short family biography by his brother and copies of newspapers cuttings and articles including one by Daly himself from the Outspan of May 19, 1944 in which he describes being attacked by a leopard which required him to spend nearly four months in hospital both in Livingstone and CapeTown.

Two typescripts: 1. “Moose Hunting from a Woman’s Angle” and 2. “Our First Vacation –&hellip;