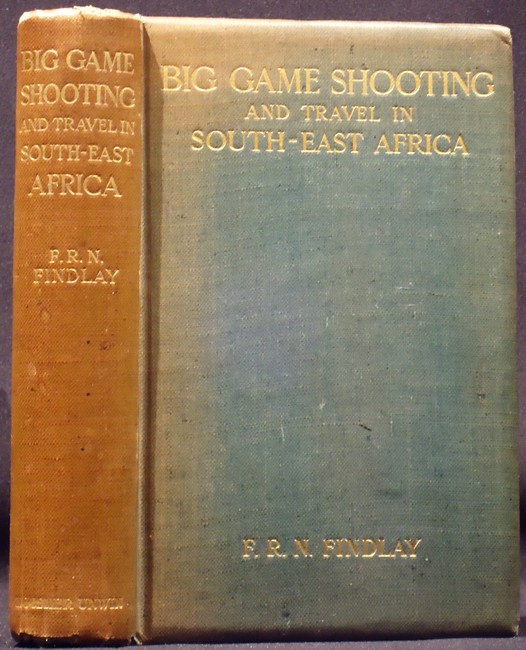 With Chapters by Olive Schreiner and S.C. Cronwright-Schreiner.

A Map and Numerous Illustrations.

xii, 313 pages, the frontispiece, which is printed on grey paper, is lightly foxed, 16 full-page plates and numerous illustrations in the text, folding map. Original blue buckram over bevelled boards with gilt titling on spine and upper cover - the spine is faded to brown, top edge gilt, contents bright, a good copy.

Czech (Dr. Kenneth P.) An Annotated Bibliography of African Big Game Hunting Books 1785-1999 (Second enlarged edition, Trophy Room Press, 2011), pages 95/96, ‘Findlay trekked through the virtually unknown recesses of the vast swamp and forest lands of Portuguese Southeast Africa and along the Urema and Massarara rivers. The game encountered included buffalo, waterbuck, hartebeest, lion, leopard, reedbuck, and other game. He then travelled to Zululand and bagged black rhino, buffalo, kudu, hippo, and inyala near the Manzibomvu River. Findlay also describes a springbok and ostrich hunt in the karoo country of Cape Colony. Though an ardent sportsman, he also realized the limits of wild game in Africa and argues for the preservation of habitat and maintaining healthy numbers of game animals.’

Olive Schreiner, the author's aunt, contributes Part I (8 pages) to Chapter 20, "The Fauna of Africa: Conservation or Extermination", a paper entitled, "Waste Land in Mashonaland" in which she describes the destruction of the fauna of Mashonaland, 'For the moment we are so entirely bent on advancing the claims of a material civilisation, which we are inclined to regard as the all in all of life, that more subtle, if equally practical and important, considerations are apt to be forgotten. This view is forced on us when we consider the reckless and entirely wanton destruction of the one form of production for which the African continent, and more especially its southern portions, stand pre-eminent among the world's divisions - our astonishing fauna.'