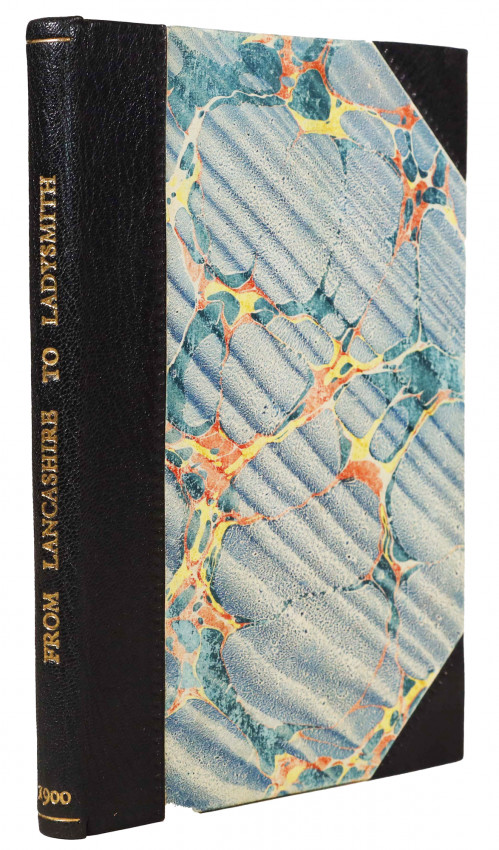 By one of the Regiment

Extracted from the title page the contents include: a detailed account of the forced march from Escourt to Springfield and a graphic description of the Battle of Spionkop, Potgieters Drift and Pieter’s Hill, the sad death of Col O’Leary and the entry of the relieving force into Ldaysmith, where, for four months British Solidiers had upheld the honour of Great Britain.

There is an account of the life of Lieutenant Colonel William MacCarthy O’Leary, who, soon after the declaration of war in 1899 took part in most of the engagements for the relief of Ladysmith. At Pieters Hill, on the 27th February, 1900, the South Lancashire’s much distinguished themselves. They carried the hill, and opened the road to Ladysmith, as General Sir Redvers Buller reported in his dispatch of February 28th; “The main position was magnificently carried out by the South Lancashire’s about sunset.”

But in this final and successful attack, Lieutenant Colonel O’Leary was shot dead – close to the enemy position while leading his men to victory. The World of the following week wrote:- “It would be impossible to exaggerate the feelings of sorrow with which all ranks of the 1st Battalion South Lancashire Regiment will have laid the remains of their much loved commanding officer to rest after the last days fighting for the relief of Ladysmith. Lieutenant Colonel O’Leary was one of the most popular commanding officers of the whole service. He was a trusted friend of every officer, non-commissioned officer and man serving under him, entered into all their sports, and never thought of sparing himself where the interests of his Battalions were concerned. Though one of the tallest men in the army, he was also the most active, and it was largely due to his encouragement of sport that the 1st South Lancashire had established such a reputation for themselves as cricket and football players, in both of which games they excelled, as Lieutenant Colonel O’Leary needed to say, with true Irish humour, “the old 40th should.” He was twice mentioned in dispatches for his services. L. G. February 8th 1901 by General Sir R Buller who referred to Lieutenant Colonel MacCarthy O’Leary as a great loss that the country sustained by his death.

There is also a description of the war memorial that was erected in honour of his service in Warrington plus several images. http://www.millstreet.ie/blog/2015/10/02/lieutenant-colonel-william-maccarthy-oleary-coomlogane-house