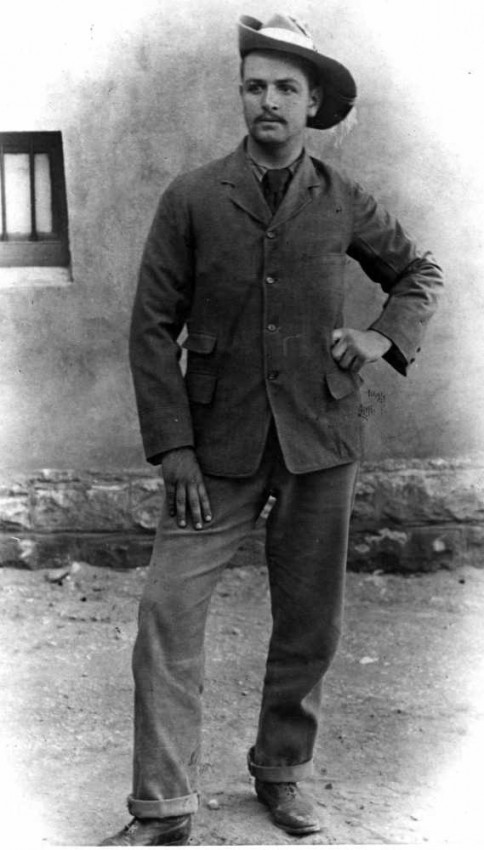 1) Manuscript book, disbound, sewn into very tatty brown-paper covers, containing a (previously unrecorded?) farewell letter by a Boer Izak Bartholomeus Liebenberg, who is about to be executed for the murder of Lieutenant Neumeyer, as well as a number of contributions by Boer POW’s, some from before the end of the war, some afterwards. As some of the Bittereinders were not repatriated from Bermuda (which is referred to in the title of a song, as well as  in another ‘a strange people with a strange language on an island’, so possibly Ceylon) until well after the end of  hostilities, it is possible that the book may have come from there originally. The entries are not in order of date precedence, which makes the item even more intriguing. There is a wealth of verse and songs – some of which may be of original POW composition, mostly in Dutch/Cape Dutch – an interesting and potentially important piece of cultural and social history. The item’s some 130-odd pages by a number of contributors written in different hands, consist of:

50 pages of (Bible Study?) notes and references to verses and psalms, lists of the names of biblical characters etc. Includes a few blank pages, as well as a seemingly unconnected page bearing verse 1 & 3 of the “Vereenigs lied” – a sort of patriotic song. Written in at least five different hands. Signed by W J van den Berg, Rietpan 21/3/1904 (?)

P 59 &60 Song/verses about a Boer warrior named du Preez who is on the lookout for his bride. Different hand from previous.

P59,58,91 Lament of 12 quatrains in which the writer bemoans his losses and his fate. Different hand from previous.

P84-87 Letter written from Aliwalnoord, 10 Jan 1902 to “ Mijn Moeder en Broertjies…”  by Izak Bartolomeus Liebenberg, who is about to be executed by the British for the murder of Lieutenant Neumeyer. He bids his family farewell in moving terms and makes several testamentary bequests. A note is appended which states that he was hung the next day. Different hand from previous, probably written as dictation or as a copy of the original. ( Scheepers in this westward flight, relentlessly pursued by Henniker, was down to 100 commandos having lost men all along the way. One of his more serious losses was that of an officer, Lt Izak Liebenberg, who was captured in a barn on the farm Paardefontein near Pietersburg on 8 June 1901. Of Liebenberg's 17 men, 14 were killed and buried in a shallow grave. Liebenberg later stood trial and was executed on 11 January 1902 at Aliwal North. A de V Minnaar. Military History Journal, Vol 7 #3, 1987)

P95-96 “Engelsman jou volksverleier…” an anti-British song of 12 verses, in the same hand as above, but signed ‘de trouw dienaar’.

P112 -115 Sheet of music with words of the first verse, then the entire text of the “Volkslied van de Oranje Vrystaat”. Different hands from previous.

P118 Poem/song to congratulate someone unnamed on the occasion of their birthday. 3 verses. Different hand from previous.

P123-124 List of Cape towns, mostly spelled very phonetically, (possibly the home-towns of Cape Rebels in the camp) then a short paragraph which has some loss on the right hand side, but signed by R J Erskine. Different hand from previous.

Provenance: Although there is no definite ownership assignable to the document(s), the present owner has stated that “the family has always had it”. Her grandfather was a du Plessis, so it is a distinct possibility that either the Ds du Plessis (Liebenberg’s letter), or the contributor M C du Plessis (if this is a different person from the preceding), was related to the family. Several of the signatories can in all probability be identified from POW records. Thus a W J v d Berg, ID no 11966, was a POW in an unidentified camp; a M C du Plessis ID No 20158 was held in Bermuda; a J H Vermeulen, ID no 20569, was held in Bermuda; and a J C Janse van Rensburg, ID no 24145 is also in the records. Liebenberg’s case is well-documented.