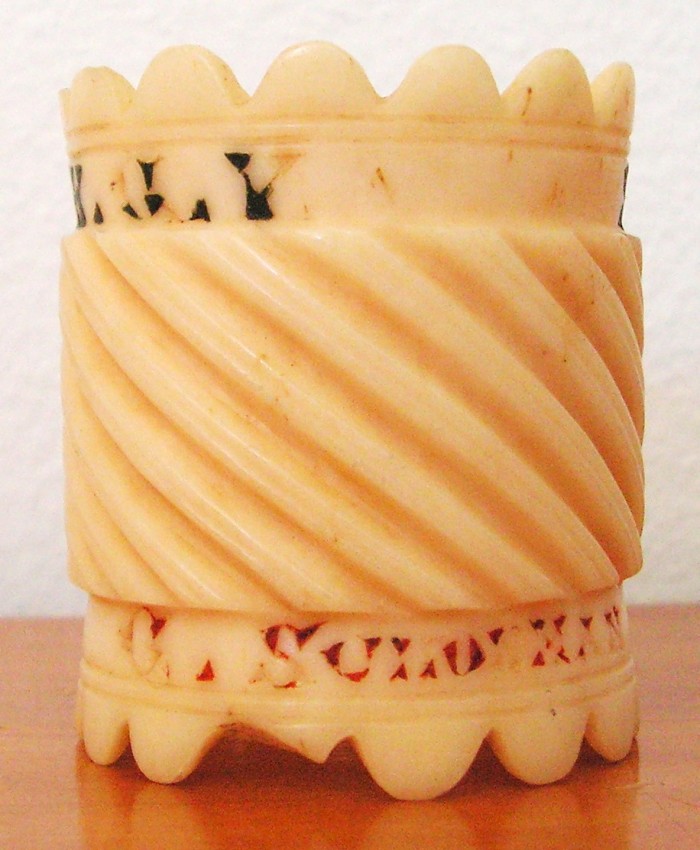 Bone, or possibly horn, napkin ring, measuring 45 mm (height) by 40 mm (diameter). The body of the ring has a series of diagonally incised lines, and the edges have a toothed effect. Below the top row of teeth is the carved lettering, marked in black ink, ""St Helena. 1902. K.G.V." Above the bottom row of teeth is the maker's carved name "G. Schoeman", marked in red ink.  Some of the teeth are chipped, but overall the item has survived well, and is in good condition.

The letters K.G.V. are an abbreviation of the Dutch "krijgsgevangene", or prisoner-of-war. "During the period 1900 to 1902 a great number of Boer prisoners of war were shipped to overseas camps. ... In April 1900 the first POW camp was established on the island of St. Helena at Deadwood. Later more camps were established on St. Helena at Deadwood, Camp No. 2, Broadbottom, Fort High Knoll and Jamestown. ... To earn more pocket money and to supplement their diet or to buy tobacco, or simply to relieve their boredom, the prisoners turned to making curios, carving toys and many different kinds of artifacts. As tools were scarce the pocket knives of the POWs became the most commonly used tool. For material they used wood, bone, ivory, stone, horn and textiles." - Pieter Oosthuizen: Boer War Memorabilia, pp. 83-4. A list of Boer POWs on St Helena provides the names of four Schoemans with first names starting with G.  Gert, Gerhardus and Gideon Schoeman were all captured at Paardeberg in February of 1900 following Piet Cronje's surrender, while Gideon Evert Schoeman of Johannesburg was captured at Boschmanspoort in December of 1901.