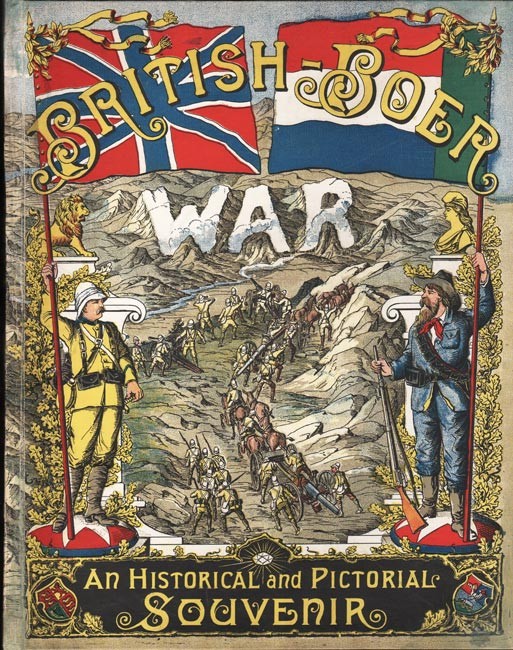 An Historical and Pictorial Souvenir, Illustrations from special photographs and drawings by A.J. Henkce, J.P. Robertson, R.J. Wallace and others. Complete and Accurate Maps. political and Historical.

Sold Only by Subscription.

190 pages, large 4to (375 x 300 mm), numerous black & white illustrations, coloured maps of the world including Southern Africa at end, elaborate pictorial covers in colour the illustration carries over from the front to the back and is of an imaginary engagement between Boer and British forces, a Boer commando and a British soldier holding standards border the front cover, the titling is in yellow, cloth over boards, edges dyed red, the most colourful and dramatic cover on a contemporary book on the Anglo-Boer War we have seen, a exceptionally good copy preserved in a red cloth solander box with red leather title labels on the upper cover and spine.

A South African Bibliography, volume 1, page 552, lists two copies. Hackett: South African War Books, page 136, lists the book but does not comment on the binding. 'British-Boer War' was sold by subscription only from orders taken by door-to-door salesmen which was a common way of marketing books in America at the turn of the twentieth century. A variety of bindings was available the most usual being half leather with cloth sides. This elaborate pictorial version may have been a more expensive variant as it seems to be the rarest issue.

History of the Zulu War.