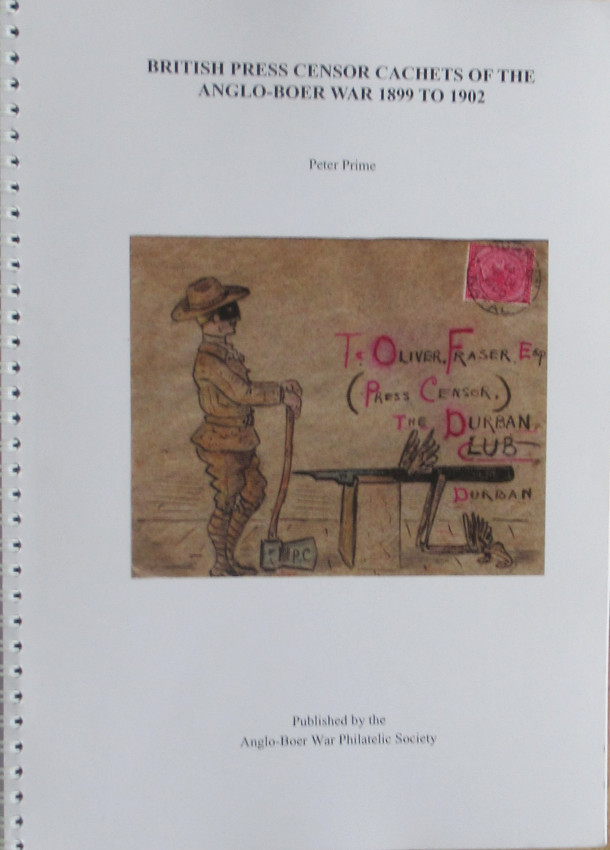 During the Anglo - Boer war mail was censored in several ways. This book attempts to document just one type of censorship --the civil censor cachets used by the British.

The Bazaar, Exchange and Mart in South Africa, published the first articles covering research on censor cachets during 1901 through 1903. This early work was done by Miss Winifred de Villiers and Dr. C. B. Plowright and only covered cachets used in Cape Colony.

During the 1940's Stephen G. Rich wrote his book Philately of the Anglo-Boer War, 1899-1902, in which he further addressed censor cachets. His chapter on Censor Marks discusses all the issues the current author has had in compiling this book: the identification of colours, the date usage of the cachets and the location usage of the dumb cachets.

Rossouw & Pirie did more research into Anglo- Boer War censor marks and presented their findings in a tabulated form in several issues of The South African Philatelist in 1954 and 1955.

Major H M Criddle in 1965 and 1966 combined the previous research and updated it with his own input in The Anglo-Boer War Philatelist. This correlation of known censor marks did not however identify any new cachets.

In Appendix 1: Censor Locations a cross - reference list has been compiled that combines the earlier work mentioned above with that done for this book. Within this book all the locations suggested by the various researchers (except Criddle who did not identify any new locations) to have censor cachets are shown with copies of the cachets that have been verified or discussions by this author as to why certain locations although previously noted to have cachets are now thought not to have.

The numerous manuscript censor marks seen on covers from this period are not included in this book except to indicate approximate changeover dates to a cachets introduction in some towns. In general the Prisoner of War handstamps have not been included as they have already been comprehensively researched and documented on other books that are generally available. A number of cachets used on concentration camp mail are shown in the book because it seems that general mail also received these particular cachets.

This book is the culmination of the latest efforts by Stuart Duggan and myself to expand on these previous attempts to document the British civil censor cachets used during the Anglo-Boer War. The extensive collection of the late Ken Griffith's was initially used as the basis for research before the collection was dispersed among various collectors. Other collectors have provided access to their collections to aid in the research of the subject thus providing additional material to supplement that gathered from Ken Griffith's collection. I suspect it is by no means complete and that as soon as this book is published collectors will examine their collections and further cachets that are unrecorded here will no doubt be found along with colour variations and dates outside those noted.

Title,Acknowledgements, Table of Contents, Introduction. vii plus 136 pages text with mumerous colour reproductions of censor cachets, with data and information