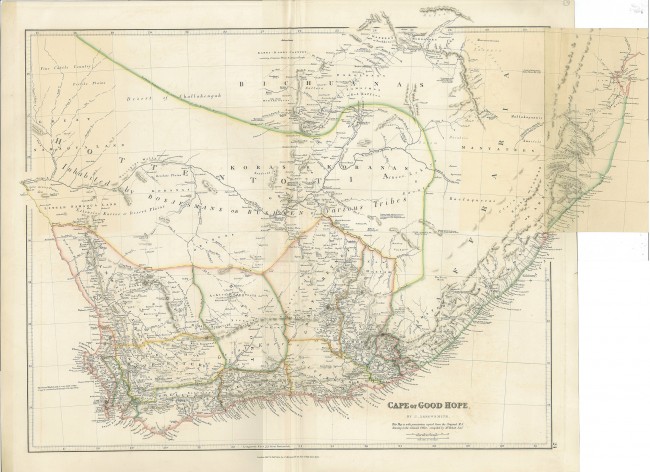 With permission copied from the Original M.S. drawing in the Colonial Office, compiled by Mr. Hebert, Senr

This map was published in the London Atlas of Universal Geography, J Arrowsmith ..., exhibiting the physical & political divisions of the various countries of the World, constructed from original materials. Is most respectfully dedicated to his venerable friend John Middleton Esqr. As a testimony of gratitude and esteem, by his much obliged & humble servant, John Arrowsmith, F.R.G.S. & R.A.S. John Arrowsmith was a nephew of the patriarch, Aaron, and worked out of London. He was one of the foremost cartographers of the era and, like his uncle, he aspired to design maps that were up to date.

The map has original outline colouring; it was printed from a copper plate onto two pages that have been joined. There is a fine vertical crease adjacent to the join.An interesting feature of this map is small extension of the map (11 x 23 cm) that is attached to the map in the north-east

This map is probably the most important map of the region published before the Great Trek commencing ca. 1835. He indicates on the map, near Phillipolis, then just a missionary station, that this ‘country lately taken possession of by the Colonial farmers because of the protracted drought.’ The eight subsequent updates of this map to ca. 1890 provide one of the best cartographic records of the expansion of the Boer settlements to the north and east of the Cape Colony.The status and cartographic history of this important map were elaborated by Professor Elri Liebenberg and her article can be read here:

The map, with original outline colouring, also shows the approximate location of indigenous groups, assigning a large area to the ‘Koras or Koranas’, a group that now has disappeared, with its language, snippets of which were recorded by William John Burchell; the group has been absorbed in to the Griqua and other groups. The map also displays eleven magisterial districts and the tracks of explorers such as Thompson, Bain and Biddulph.

The map also records of the Zwart Land, in today’s Western Cape, that it is ‘very fertile country: it may be considered the Granary of the Cape Colony'. Along the Zeekoei River, a southern tributary of the Orange River, Arrowsmith shows the location of Van Plettenberg’s Beacon (remnants now at the Iziko Museum), the north-east corner of the Cape in the 1770s, but subsequently became redundant when the border was moved to the Orange River.

Despite this map’s unquestioned historical importance, examples of map are remarkably scarce. This example is in fine condition: a crisp imprint and a virtually no blemishes on the page. This map is a ‘must have’ for any serious collector of maps of the Cape Colony, the history of the colonial expansion and the distribution of indigenous groups at the beginning of the Great Trek.