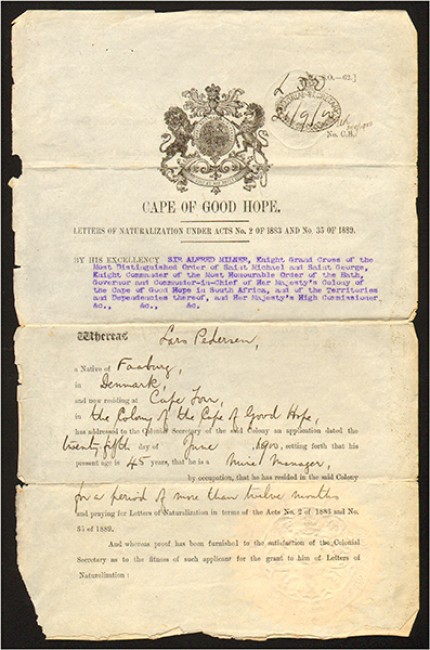 CAPE OF GOOD HOPE, Letters of Naturalization under Acts 2 of 1883

and No. 35 of 1889, by His Excellency Sir Alfred Milner, Knight of the Grand Cross of the Most Distinguished Order of Saint Michael and Saint George, Knight Commander of the Most Honourable Order of the Bath, Governor and Commander-in-Chief of Her Majesty’s Colony of the Cape of Good Hope in South Africa, and of the Territories and Dependencies thereof, and Her Majesty’s High Commissioner, Etc, Etc, Etc.

Whereas Lars Pedersen, a Native of Faaborg in Denmark, and now residing at Cape Town, in the Colony of the Cape of Good Hope, has addresses to the Colonial Secretary of the said Colony an application dated the twenty-fifth day of June 1900, setting forth that his present age of 45 years, that his is a Mine Manager, by occupation, that he has resided in the said Colony for a period of more than twelve months and praying for Letters of Naturalization in terms of the Acts No. 2 and No. 35 of 1889……..that the said Lars Pederen shall henceforth to all intents and purposes whatsoever, be deemed, taken, and esteemed to be entitled to all political and other rights, powers, and privileges, and be subject to all obligations to which a natural-born British subject is entitled or subject in this Colony.

Given under my hand and the Public Seal of the Colony of the Cape of Good Hope, this eighteenth day of September, in the year of our Lord One Thousand Nine Hundred 00.

Signed by A. Milner, Governor. By command of His Excellency the Governor in Council.

Single sheet – foolscap (340 x 215 mm), with a large embossed red seal. Torn at the folds and frayed at the edges and lightly browned.