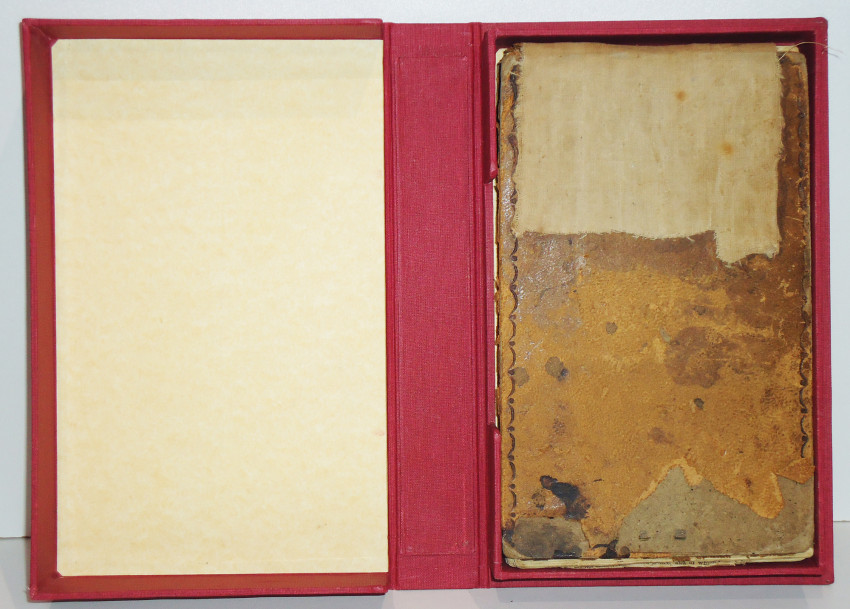 Small notebook leather bound with a simple repair with tape to the spine with no titling on it. The pages are working loose.  The notebook is housed in a specially made solander box with red title label on the spine – Cape Field Artillery.

The notebook is a collection of newspaper clippings and notes in a contemporary hand in ink which all relate to the Cape Town Volunteers and cover the period 1859 – 1862. The handwritten entries are copies of regimental orders signed by Major Dupratt.

Cape Volunteer Artillery South Africa's oldest gunner regiment owes its establishment to the Indian Mutiny when the Cape Volunteer Artillery was raised from a nucleus of men from the Cape Royal Rifles. Its first meeting was held on 26th August 1857, and Chevalier du Prat was elected to command. The Artillery paraded for the first time on 2nd October with two brass guns drawn by the gunners themselves and on the 7th of the same month they attended their first Volunteer review, held this time at Stellenbosch. The General Officer commanding the troops in the Colony had refused them the loan of a gun for the occasion but the Royal Navy obliged with a 12-pounder for the day.

At its first live shoot, the Artillery fired solid shot from two six-pounders from a position between the Castle and the Military Hospital, probably on the site of the old Sir Lowry Road market. The target was a barrel carrying a flag, floating in Table Bay, quite possibly where the National Road from the North today joins the Heerengracht. In October the gunners took over garrison duties at the castle, enabling Grey to send some Royal Artillery to India. The second live shoot was carried out on 2nd November from the same place as the first, but this time the Artillery used shrapnel at a range of 650 yards, as well as solid shot. The results were reported to be excellent, and Grey's appreciation of the corps' services took the form of a recommendation to the War Office that the guns on loan be presented to the Cape Volunteer Artillery as a gift. This, however, was never done but the gunners received the harness. In the same year John Molteno, member of the Legislative Assembly for Beaufort West, moved that the Artillery be given free ammunition and that their annual grant of £50 be increased, but the House was not in a generous mood and the grant remained at its existing figure. http://samilitaryhistory.org/vol021jj.html

After news of the Indian Mutiny reached Sir George Grey, Governor of the Cape, he sent every available military unit in the Cape Garrison to India which left the Cape's military forces badly depleted of manpower. The volunteers of the Cape Royal Corps soon found themselves drilling on the guns stationed in Table Bay. As a result of their work on these batteries the Cape Town Volunteer Artillery (CVA) was born on 26 August 1857 at the old Town house in Greenmarket Square, Cape Town.

The regiment is one of the oldest volunteer artillery regiments in the world still in existence today, after it celebrated its 160th anniversary on 26 August 2017. Major Duprat was the first Commanding Officer. In 1867 the Duke of Edinburgh was escorted to Cape Town from Simonstown by the Cape Town Cavalry and upon his arrival the Cape Town Volunteer Artillery, drawn up on Caledon Square, fired a Royal Salute as he passed towards Adderley Street. The great occasion of the royal visit was on 24 August, when the Prince laid the foundation stone of the graving dock and the CVO thundered out again in salute on the laying of the stone.

Chevalier Alfredo Duprat was born in Lisbon on 21 July 1816 and was a member for Portugal on the Combined Anglo-Portuguese Commission dealing with captured slavers. Major Duprat was the first Commanding Officer of Cape Town Volunteer Artillery (CVA) when the unit was raised in Cape Town on 26 August 1857. https://en.wikipedia.org/wiki/Chevalier_Alfredo_Duprat