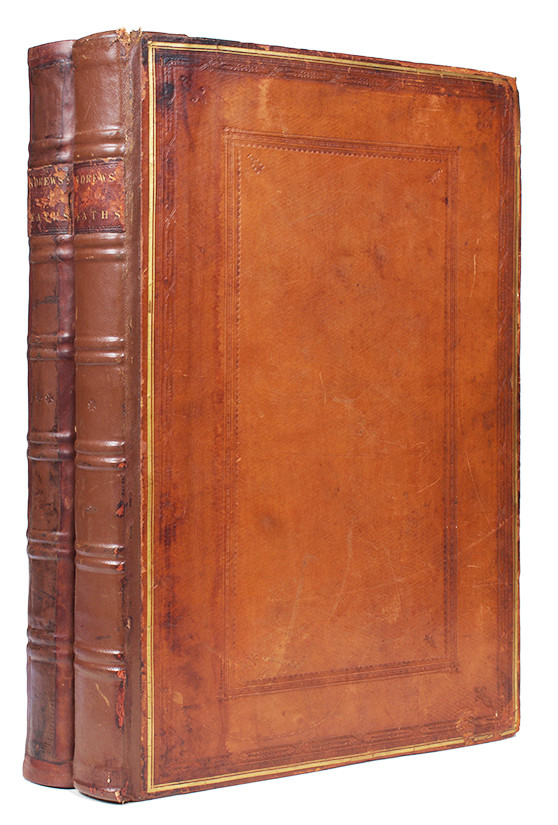 The drawings taken from living plants only.

With the appropriate specific character, full description, native place of growth, and time of flowering of each; in Latin and English.

Each figure accompanied by accurate dissections of the several parts (magnified where necessary) upon which the specific distinction has been founded, according to the Linnaean System.

First edition: volume 1 and 2 of a 4 volume work: unpaginated, each volume with descriptive text and full hand coloured engraved plate opposite the text, volume 1: 72 plates, volume 2: 73 plates, several pages of text with offsetting from the plates and slight foxing, the plates are in very good condition, both volumes with book plates on the front paste down end papers, full morocco leather binding with gilt ruled borders and blind tooling on the covers, titled gilt on the spines, inner gilt dentelles, rebacked preserving the original back strip, reinforced hinges, all edges gilt, a very good set.

Henry Charles Andrews (fl. 1794 – 1830), was an English botanist, botanical artist and engraver.Andrews' major work is considered to be his Coloured Engravings of Heaths, published in four volumes between 1794 and 1830.It focused on the many species of the genus Erica that were introduced to Great Britain from South Africa in the early and middle 19th century, leading to what has been called an "Erica mania" in British horticulture. The 4 volume set has 288 hand coloured engraved plates. Andrews drew and engraved all his plates, wrote most of the text and did his own colouring. According to a contemporary announcement, Andrews also taught drawing from nature and etching to private students.
https://en.wikipedia.org/wiki/Henry_Charles_Andrews