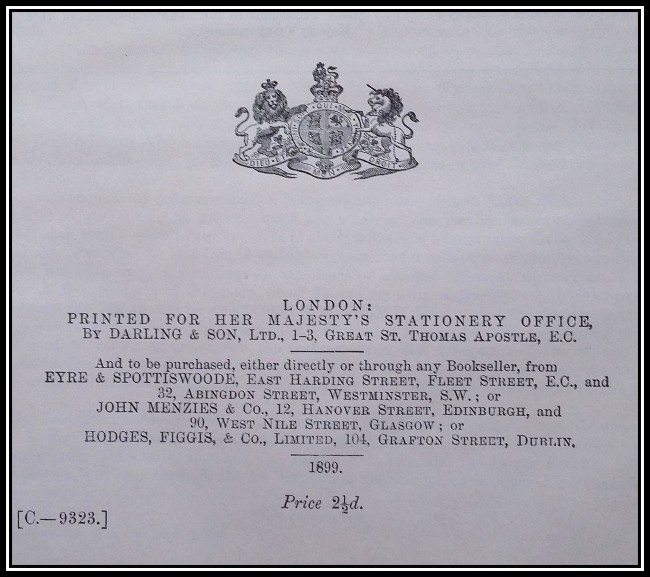 Correspondence with Mr C. J. RHODES relating to the proposed extension of the BECHUANALAND RAILWAY

Presented to both Houses of Parliament by Command of Her Majesty. May 1899.

Mr. C. J. Rhodes to Colonial Office (April 28, 1898) - Submits proposals for the extension of the existing line of the Bachuanaland Railway Company to the Lake Tanganyika, and asks for the co-operation of Her Majesty's Government.

Colonial Office to Mr. C. J. Rhodes (May 1, 1899) - States that Her Majesty's Government are not able to accept any of the proposals submitted to them, and makes a counter-proposal.

Mr. C. J. Rhodes to Colonial Office (May 9, 1899) - States objections to the counter-proposal of Her Majesty's Government.

# The British South Africa Company (BSAC or BSACo) was established following the amalgamation of Cecil Rhodes' Central Search Association and the London-based Exploring Company Ltd which had originally competed to exploit the expected mineral wealth of Mashonaland but united because of common economic interests and to secure British government backing. The company received a Royal Charter in 1889 modelled on that of the British East India Company. Its first directors included the Duke of Abercorn, Rhodes himself and the South African financier Alfred Beit. Rhodes hoped BSAC would promote colonisation and economic exploitation across much of south-central Africa, as part of the "Scramble for Africa". However, his main focus was south of the Zambezi, in Mashonaland and the coastal areas to its east, from which he believed the Portuguese could be removed by payment or force, and in the Transvaal, which he hoped would return to British control. It has been suggested that Rhodes' ambition was to create a zone of British commercial and political influence from "Cape to Cairo", but this was far beyond the resources of any commercial company to achieve and would not have given investors the financial returns they expected. BSAC was created in the expectation that the gold fields of Mashonaland would provide funds for the development of other areas of Central Africa, including the mineral wealth of Katanga. When the expected wealth of Mashonaland did not materialise and Katanga was acquired by the Congo Free State, the company had little money left after building railways for significant development, particularly in areas north of the Zambezi. BSAC regarded its lands north of the Zambezi as territory to be held as cheaply as possible for future, rather than immediate, exploitation.