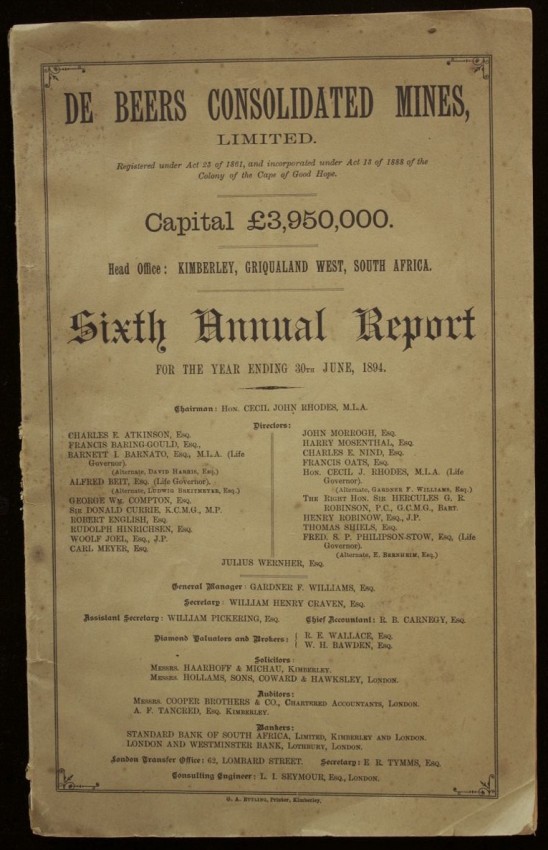 This title appears to be an extremely scarce publication as no copies of this book are listed in SABIB.

Report of the Directors of De Beers Consolidated Mines;

An Explanation of Crushing and Concentration Plant by the General Manager;

Table of Statistics of De Beers since its formation, 1st April, 1888;

Gardner F. Williams was for many years the General Manager of the De Beers Consolidated Mines, a gigantic undertaking founded by Cecil John Rhodes. He was an American who came to S.A. in 1884, after accepting an offer from the Transvaal Gold Exploration and Land Company to manage their affairs at Pilgrim's Rest in the Eastern Transvaal. After a year he decided to return to America but first wanted to see the Kimberley Diamond Fields, where he met Cecil John Rhodes. On his return journey to England he again saw Rhodes, who was on the same ship, and after a long conversation Rhodes decided that Williams was the only man fit for the job to manage the De Beers Mining Company. Rhodes offered him the position as manager of De Beers at an annual salary of three thousand Pounds, Williams immediately accepted.

Some famous names from that bygone era appear in the list of directors printed on the front cover i.e. Barnett (Barney) I. Barnato, Alfred Beit, Hercules G. R. Robinson, and Woolf Joel, a mining magnate who was shot dead by the German adventurer Ludwig Kurtze von Veltheim when he refused to go along with a plot to kidnap President Kruger.